WARNING: QUEEN OF SHADOWS IS THE FOURTH BOOK IN THE THRONE OF GLASS SERIES, SO THERE ARE BOUND TO BE SPOILERS WITHIN THIS REVIEW. I HAVE DONE MY BEST TO KEEP THEM LIMITED BUT I CANNOT PROMISE THAT YOU WILL LEAVE WITHOUT HAVING SOME PLOT DETAILS FROM PREVIOUS BOOKS SPOILED. IF YOU HAVEN'T READ THE SERIES AND ARE INTENDING TO DO SO, THEN PLEASE PLEASE PLEASE DO NOT READ ON! THIS IS A FAIR WARNING, AS THESE BOOKS ARE AMAZING AND SHOULD BE ENJOYED BY EVERYONE WHO READS THEM IN THE SAME, EXPLOSIVE FASION! THANK YOU. 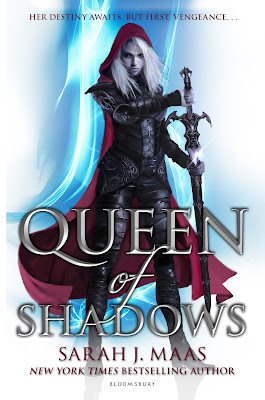 Official synopsis: "Everyone Celaena Sardothien loves has been taken from her. But she's at last returned to the empire—for vengeance, to rescue her once-glorious kingdom, and to confront the shadows of her past . . . She will fight for her cousin, a warrior prepared to die just to see her again. She will fight for her friend, a young man trapped in an unspeakable prison. And she will fight for her people, enslaved to a brutal king and awaiting their lost queen's triumphant return. Celaena’s epic journey has captured the hearts and imaginations of millions across the globe. This fourth volume will hold readers rapt as Celaena’s story builds to a passionate, agonizing crescendo that might just shatter her world."

I am something of a latecomer to the world of Sarah J. Maas and the amazing Throne of Glass books. I only read Throne of Glass and Crown of Midnight last year, before deciding in my wisdom, and with some people saying that book three had literally killed people with all the emotional goings on, to leave Heir of Fire for as long as I possibly could so that the wait between book three and the gargantuan (seriously, it's huge, you could hurt someone with it!!) Queen of Shadows, would be somewhat short and remotely bearable... So picture my face late August when I finished Heir of Fire and wanted to cry and shout because I had a whole week and a half to wait for Queen of Shadows. I was not a happy bunny! Thank god I decided to wait, I do not think I would of managed a year without having a breakdown!.. Any who... on to Queen of Shadows, which quite literally ripped by heart from my chest, threw it on the ground and stomp, stomp, stomped it into a pulpy, bloody mess.

This book is seriously one of the best I have ever read, and I would go as far to say it is my favourite book I have read in 2015 so far! Yes, it is not perfect, but nothing ever truly is, is it? But this book was epic, it had scale, it had action, it had romance and it had friendship. There was blood, and guts, and revenge, and more sexual tension than you could wave a stick at! It had it all and then some!

The book opens with a very short chapter that had me holding in the tears from the very beginning. Poor Dorian has been taken over by a valg demon after his evil father placed a wyrdstone collar around his neck. I LOVED this chapter and the chapters from within his mind, showing what was actually going on inside him, the conflict, the fear, the complete loss of self, and thought this was a really cool way for Sarah to add a new element to the story. We knew from Heir of Fire and from people wishing to die once they had been possessed that it cannot be pleasant, but to actually see it and feel it through Dorian's eye was amazing, albeit it horrifying and very sad to witness.

I loved that we got to see a lot more of Manon, who is really becoming one of my favourite characters in the city. I loved Celaena so hard in this book it's crazy. Especially when she became Aelin and really let go, really fought. Some of the fight scenes in this book were incredible, and the climax of the book. WHOA! Do not even go there! I am really confused as to where things will go next as the ending of the book seemed pretty final, despite throwing some new elements into the mix. Aelin's powers are incredible though and I am looking forward to seeing them develop, along with the characters. I think that is the true magic of Sarah's works. Her characters are all so relatable, and believable and they all develop so well, changing as you would expect them to with age and with experience in this weird and dangerous world.

As per the usual, the cover is absolutely stunning! The design department at Bloomsbury are incredible and despite the covers being relatively simple with just Celaena standing on the front, they are so stunning and visually exciting and they look so beautiful lined up on the shelf. I am a massive hardback nerd and decided to re-buy all the books in US hardback to go alongside my UK paperback and let me tell you, it is a stunning collection and as soon as I get my new bookcase up they will be the first to find a home there!

When I finished the book, I wrote a very short review and I mean very. It was two sentences, and I am going to close my review with them because I stand by them and they sum up my reading experience perfectly. Thank you Sarah for another amazing read, for Bloomsbury for bringing into the forefront and to Celaena for being so bad ass! Bring on book 5!

Forget rattling the stars! Queen of Shadow tears them from the sky and scatters them to the wind. Stunning from start to finish, and it has left me gasping for the next instalment!


Buy from Amazon US
Buy from Book Depository
Posted by Ryan at 15:00 No comments:

Labels: 2015, A Court of Mist and Fury, A Court of Thorns and Roses, Crown of Midnight, Heir of Fire, Queen of Shadows, Reviews, Sarah J Maas, Throne of Glass

FINALLY! We're nearly at the end and we will finally get all the answers to our zombie related questions... I hope!

Zom-B Goddess is the twelfth and final book in Darren Shan's incredible Zom-B series. It's been 3 years since the first book was published, and now, in April 2016 the grand finale will be making an appearance and what an appearance it is... FEAST YOUR EYES!! 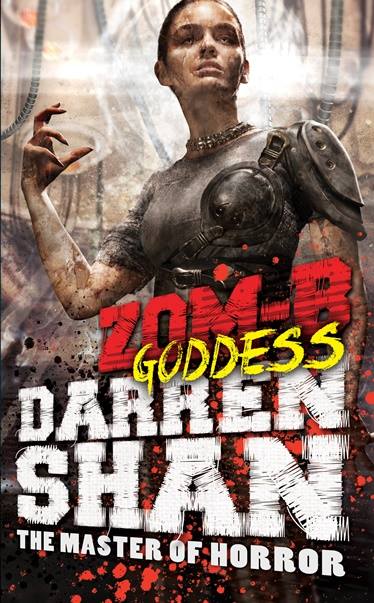 WHAT!!! WHAT!!! What is life? That cover? Wow. It's the best of the series by far. It's epic, it's stunning to look at and after the quieter looking cover for Book 11, Zom-B Fugitive, it's exciting too. I love the colour of it, the armour B is wearing. Her expression - you better know she means business!

I for one am incredibly excited to see how it is all going to unravel and cannot wait for the book to get here!

Bravo Cliff Nielson for creating such a stunning looking series. All twelve books are great and really stand out.
Posted by Ryan at 10:00 No comments: