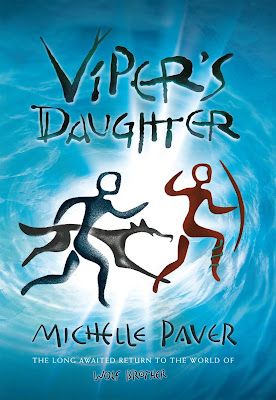 Official synopsis: "For two summers Torak and Renn have been living in the Forest with their faithful pack-brother, Wolf. But their happiness is shattered when Renn realizes Torak is in danger - and she's the threat. When she mysteriously disappears, Torak and Wolf brave the Far North to find her. At the mercy of the Sea Mother and haunted by ravenous ice bears, their quest leads them to the Edge of the World. There they must face an enemy more evil than any they've encountered. Viper's Daughter plunges you back into the Stone-Age world of Torak, Renn and Wolf: a world of demons, Hidden People and exhilarating adventure which has entranced millions of readers."

Anyone that knows me at all knows that I am a Michelle Paver stan. That's right. Not a fan. A stan. If she released her shopping lists, bound together with a cover, I'd buy it and read it again, and again. Since 2004 when I first read Wolf Brother, the first book in the Chronicles of Ancient Darkness series, I haven't looked back and haven't missed a single book that has been released... She's my fave, basically...

So you can imagine the excitement I felt when last year, Michelle announced that there wouldn't be just one, but three, yes THREE, brand new books in the series, taking the total from six, to nine. It had long been teased, and Michelle had said time and time again that she would never say never and that if the ideas came to her then she would of course love to revisit the world of the Forest, and go on adventures again with the lovable Torak, Renn, Wolf and the whole ensemble. And by God I'm glad she had the right ideas because reading this was like stepping back in time (well, obviously it is set 6,000 years ago...) to being that kid again so in awe.

Reading it felt like coming home. You see, I had a rough patch when I read the series the first time. Most of us do. Adolescence... Ugh... But the books were a constant for me. Somewhere I could escape and feel free, and it didn't matter what was going on in the outside world. I was with Torak, Renn and Wolf, and we, together, fought the Soul-Eater's and the demons of the Forest. Then, when my mum passed away in 2016, I reread the series three times and each time I felt more and more like the me I had been before.

The moment I picked this book up, I took a deep breath, and I won't lie, I was scared... I had been waiting for this moment for ten years (since the last book, Ghost Hunter was published...). What if it wasn't good. What if it, like a lot of series revisits, just soured what was originally there? I needn't have worried because from the first page I was there. It was back, and oh my, it was magical! I felt like I was home and it was an emotional moment for me!

Despite the fact that she has been away from the world for the best part of a decade, the characters feel as rich as they ever did. Torak is still as head strong as he was in Ghost Hunter, Renn is still as stubborn and Wolf is as lovable as he has ever been in the series. It was so nice to see the characters that we fell in love with in the first place, plus a whole array of new characters, both human and otherwise... We meet clans that we haven't met previously and getting to see their different views and way of living was very interesting. The mixture of cultures within the series was always something I really loved.

And the twist... There is a twist. Who doesn't love a twist? I didn't see it coming and when it hit me I gasped and actually had to put the book down and take a breather for a moment of two before continuing on. The climatic scenes were exhilarating and took the book towards a very satisfying end that leaves you desperate for more, and thank the Guardian's there are still two more to come, so thankfully we get more!

As magical and exciting as ever, her writing more crisp and exciting than ever, Michelle has breathed new life into her own series ready for a new generation of avid readers to fall in love the exact same way that I did. I cannot wait to see what she has in store for us in Book 8, Skintaker, and Book 9!

My thanks to the lovely people at Zephyr for my copy, and to Michelle for signing it. There's a reason your my favourite because as well as being a great writer, you're a lovely person too!
Posted by Ryan at 08:00 No comments: