ZOM-B Gladiator cover unveiled and ZOM-B 7 gets a name!

Ooh! This week has been a very exciting one for fans of Mr. Darren Shan. On Thursday, Halloween no less, the master of horror revealed the cover on his official facebook page! 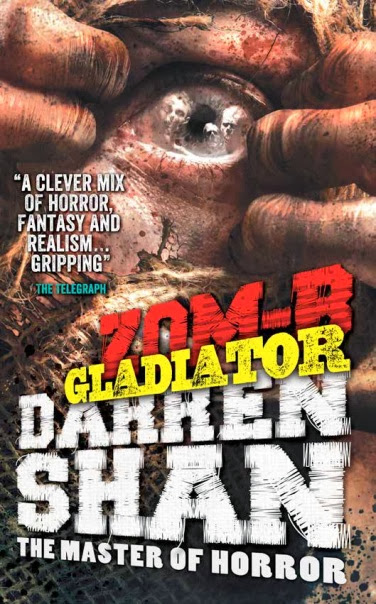 Ooh! Look at that! Nice! It's kind of hard to tell what's going on, it's quite up close, isn't it? There looks to be some time of fabric under the face, something being stuck on it? I don't know. All I know is I like it, and while it's a little quieter than the previous six covers in the sense that we can't actually see who it is or anything like that, it's still so striking and you just know it's going to look amazing next to rest of the series!

And then on Friday, Darren also revealed the title for the seventh book.

ARGH! I cannot wait! Darren teased us with a little info about Zom-B Mission on his blog saying that while he can't say much, it's the start of the second half of the series and that from here on in there are no pauses for breath, that the first half is all about setting up the major players in the story that's about to unfold in the latter half. Lordy, that sounds so exciting!

Zom-B Gladiator is published in January, and Zom-B Mission will follow in April.