The Fork, the Witch and the Worm Blog Tour 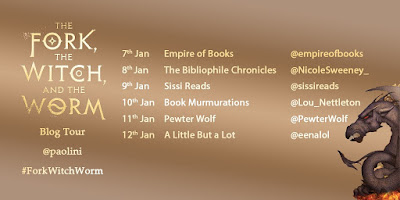 First off, hi... Welcome back. To me. To the blog. I've been MIA for far too long - if you've been around for a while you'll know the last few years have been pretty tumoltuous for me and blogging has taken a massive back seat... I've still been reading, sharing reviews on goodreads and on twitter and I'm also on instagram under @empireofbooks but the blog has been a bit neglected and one of my new years resolutions for this year is to change all that and get back into things well and truly... So when I was asked to take part in this blog tour, supporting one of my favourite authors new books how on earth could I resist? Hopefully this is the first of many! 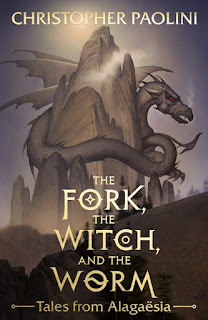 Official synopsis: "It's been a year since Eragon departed Alagaësia in search of the perfect home to train a new generation of Dragon Riders. Now he is struggling with an endless sea of tasks: constructing a vast dragonhold, wrangling with suppliers, guarding dragon eggs and dealing with belligerent Urgals and haughty elves. Then a vision from the Eldunarí, unexpected visitors and an exciting Urgal legend offer a much-needed distraction and a new perspective. This volume features three original stories set in Alagaësia, interspersed with scenes from Eragon's own unfolding adventure. Included is an excerpt from the memoir of the unforgettable witch and fortune-teller Angela the herbalist, penned by Angela Paolini, the inspiration for the character, herself! Relish the incomparable imagination of Christopher Paolini in this thrilling new collection of stories based in the world of the Inheritance Cycle."

When Inheritance, the fourth and final book in the Inheritance Cycle was released in 2011 I have to say I was a little upset. I couldn't believe it was all over. I adored this world, these characters so much, I wasn't ready to say goodbye. So when Paolini revealed that at some point he would return to the world of Alagesia and that we hadn't seen the last of our favourite hero and his stunning blue dragon I was delighted. And so I waited and finally the wait is over and was it worth it? You bet your dragon-loving-ass it was!

The Fork, the Witch and the Worm is short by Paolini's past standards. We have been spoiled with 700+ page tomes and whilst TFTW&TW comes in at just 270 pages it is jam-packed with magic, wonder, danger and intrigue.

Three stories are spread out and bordered through the book, which is split into three parts, with chapters which follow Eragon himself as he is helping to rebuild the world after the fall of Galbatorix's toxic empire. Building a new home for the dragons. Trying to please everyone. Tasks which seem impossible to fulfil within the time he has. He is but one man, how much can he be expected to do?

The stories themselves were just as magical as I had hoped they would be. A story of a wanderer, a look at life through the eyes of Angela the Herbalist, written by Christopher's sister, the very inspiration for the character herself, and a story of a dragon, an Urgal woman hellbent on revenge. My favourite is the story found in the third and final part of the book, The Worm. A story titled The Worm of Kulkaras. A story so intense and so all-consuming. The whole book itself was a delight, drawing me back into the world that I had loved so much as a kid when I read the series as and when it was published, but this story itself was so good and magical I found it hard to draw myself away from the page.

As always, Paolini's writing is beautiful. He knows how to pull you in and keep you there. I read the book in two short sittings. It would have been one had I not had a prior engagement, but once you start reading you'll find it had to stop.

The first book I have read in 2019, The Fork, the Witch and the Worm was an absolute delight to read - my only complaint is that there wasn't more! Christopher has said that this is just the first in planned offshoot from the main series, saying online that there'll be as many volumes in the extended Tales from Alagaesia as he can write. Music to my ears! I for one cannot wait to see what other adventures our favourite characters will get up to. TFWT&TW being so short didn't give us time to see many of our favourite characters and with this one subtitled Volume 1: Eragon, I cannot wait to see who we get to travel with next.

It has also made me determined to reread the series itself in full in 2019. It has been so long since I have read the series and I miss the world and the characters within it so, so much. And no doubt there will be things that I missed as there always are upon a first reading. My fellow tour host, Andy at The Pewter Wolf is also intending to reread the series this year... do I sense a read-along? Hmmm... I'm game.

And can we talk about how there needs to be a Netflix series? Seriously... they've done such a good job of adapting other series. Look at A Series of Unfortunate Events. Much like the Inheritance Cycle it was a well-beloved book series with a poorly received Hollywood adaptation but Netflix have done a great job with the series and it's been a big hit. I would personally love to see this happen for the Inheritance Cycle. To see Eragon and Saphira given the true moment to shine that they deserve... Anyone want to petition? I'm sure I'm not the only one, right? Alagaesia is just such a rich, diverse and wondrous world it just needs to be explored more!

Thank you very much to EdPR for my copy and for asking me to take part in this tour when I have been missing for so long! And thank you to Christopher for once again allowing us into your world!

The Fork, The Witch and The Worm by Christopher Paolini is published by Penguin Random House Children’s and is out now.

Don't forget to look out for tomorrows stop on The Bibliophile Chronicles and of course the rest of the blog tour as it continues!