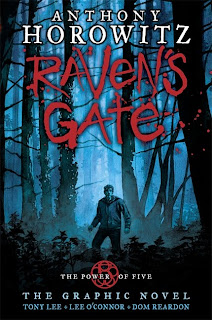 Written by: Novel: Anthony Horowitz. Adapted by:  Tony Lee.
Illustrated by: Lee O'Connor and Dom Reardon.
Published by: Walker Books.
Format: Paperback.
Released: 2nd August 2010.
Rating: 5/5.
Official synopsis: "Sent to Yorkshire on a rehabilitation programme, Matt finds himself in the midst of a conspiracy of witchcraft and murder. The Old Ones – monstrous godlike beings once banished from our world – are trying to return. Matt is about to discover that he alone stands between the forces of evil and the annihilation of humanity... Featuring striking, high-contrast black-and-white art, this distinctive graphic novel captures the brooding atmosphere of the bestselling book."

This is perhaps the first ever graphic adaptation of a novel I have read. As a kid, I devoured comic books but never graphic novels, and as I got older, written word took over. I am a massive fan of Horowitz. His Alex Rider series, and my particular favourite, The Power of Five series. I remember reading Raven’s Gate when it came out and being utterly chilled to the bone. Some of the scenes that Mr. Horowitz works in to his books are brilliant at actually making you feel the terror the characters are feeling, something that I feel makes his Power of Five series so powerful.
So when I heard that Raven’s Gate was being adapted as a graphic novel, I just knew I had to see it for myself. And it didn’t disappoint! The artwork is fantastic. Some of the images capture exactly how I felt reading the book and convey just as well what Anthony said in work. Dom Reardon and Lee O’Connor have done a fantastic job on the interior of the book, and Tony Lee has done an equally amazing job taking a 250 page book, condensing it all down and still keeping the chilling feeling that runs all the way through.
Something that I also like about this, is that it stays in line with the entire Power of Five series. The design. The logo. Everything. It is instantly recognisable as part of the Power of Five family.
As I said earlier, I’ve never really been much of a fan of graphic novels, but this adaptation just shows that what we may not always like can sometimes surprise us. A fantastic adaptation that fans of Anthony Horowitz will devour with joy, and horror!


My thanks to Sean at Walker Books for my copy!