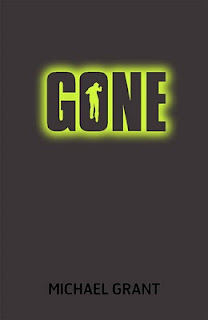 Written by: Michael Grant.
Published by: Egmont.
Format: Paperback.
Released: 3rd September 2009.
Rating: 3.5/5.
Official synopsis: "Suddenly there are no adults, no answers. What would you do? In the blink of an eye, the world changes. The adults vanish without a trace, and those left must do all they can to survive. But everyone's idea of survival is different. Some look after themselves, some look after others, and some will do anything for power...Even kill. For Sam and Astrid, it is a race against time as they try to solve the questions that now dominate their lives...What is the mysterious wall that has encircled the town of Perdido Beach and trapped everyone within? Why have some kids developed strange powers? And can they defeat Caine and his gang of bullies before they turn fifteen and disappear too? It isn't until the world collapses around you that you find out what kind of person you really are. This book offers a chilling portrayal of a world with no rules. When life as you know it ends at 15, everything changes."
It's not very often that I'm disappointed with books, but something within in me just found Gone a little bit of an anti-climax. There's been a lot of hype surrounding this series, and I have to admit, it sounds amazing, and the second of the book absolutely is. But for me, the first half of this book kind of let it down.
I found it quite slow, and really hard to get into. It wasn't really until around about the 250 page mark that I became really gripped. That isn't to say that I didn't enjoy the book, because over all, I did. The second half is fantastic.
I really liked the characters. I particularly liked the main 4 characters - Sam, Quinn, Astrid and Edilio. They are a good bunch and I think they complement each other brillianty.
The writing is top notch. There is plenty of suspense, one of the main reasons I kept reading.  Please don't be put off by my opinion on the first half. I've had people tell me that they prefered the first half of the book, and some have told me that they loved each and every second of it. I have to say though, it doesn't half pick up brilliantly! I am now chomping at the bit to read Hunger, the second book in the series. It's currently looking up at me from my reading pile so I shall be making a start of that very soon! A few people have told me that this series just gets better so I can't wait to see what's in store!
My thanks to the amazing Jenny at Egmont for my copy!
Buy from Amazon UK
Posted by Ryan at 10:00