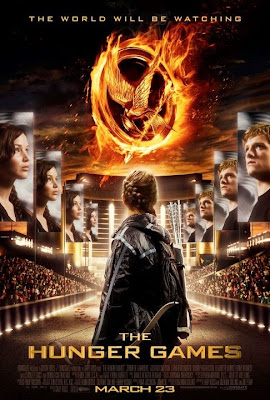 On Wednesday (3rd April), I finally went to see The Hunger Games movie! I was so excited that I was getting to see it but then a bit nervous too. Oh god! Will they murder the book?! Will they change this? Change that?! PLEASE NO!!!! I hope Jennifer is good, all of the cast too. ARGH NO!

We were also very nearly late, but then there were loads of people came in after us and they didn't start the film till nearly 20 minutes after the time on the tickets. Got a bit frustrated but it was so good. Everyone nearly stayed quiet. Some people laughed at some not very funny bits and I'm not sure why. Insert confused face here! And some people rustled, but overall I could hear the film so I was happy.

And boy I could not of been happier walking out of that cinema. Talk about incredible! The scope of it all was handled perfectly, I love the bits that cut back and forth, the whole look of District 12. The way they treat the games on the tv's in the Capitol is how I imagined it. Wow. Just wow.

The effects were good. The CGI for the outfits that were on fire could of been a little better, but then it was still cool! Overall I freaking loved it. There's not much I can really say because having read the books several times and reviewing the book here in 2010, it's all been said. Some nitpicky bits where they changed stuff but I was surpirsed how minor stuff was. They hardly changed anything. Perhaps the most true to a book film I have ever seen.


And Jennifer! Wow! She was incredible! Just incredible. She needs... many many awards for her performance. I was always dubious about how they would portray Katniss, and how someone would play her, but I just cannot imagine anyone else being Katniss. The same for Peeta. And Effie. She was awesome. I liked Donald Sutherland as President Snow. Just the right sort of mannerism's I expected. Overall, everyone was good, apart from Gale. Liam Hemsworth just... No. I'm sorry. He doesn't suit Gale, to me at all.


The way the games was done too was also great. I liked seeing the Gamemakers at work. Kind of creepy how much joy they take out of it, but so cool. And the commentating in the games too. So cool.

Argh! So happy. I just need it on DVD right now so that it can be on constant play!

Roll on next November for Catching Fire!!
Posted by Ryan at 21:03