We Were Liars by E. Lockhart [Reivews] 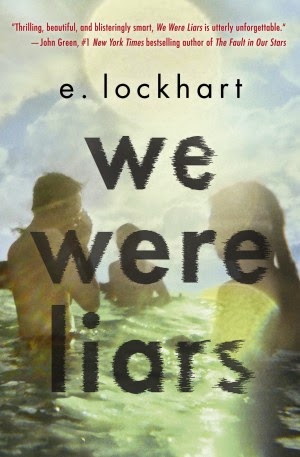 Official synopsis: "A beautiful and distinguished family. A private island. A brilliant, damaged girl; a passionate, political boy. A group of four friends—the Liars—whose friendship turns destructive. A revolution. An accident. A secret. Lies upon lies. True love. The truth. We Were Liars is a modern, sophisticated suspense novel from National Book Award finalist and Printz Award honoree E. Lockhart. Read it. And if anyone asks you how it ends, just LIE."

Hype. It's a funny old thing. Sometimes it is well deserved, the buzz around a book so palpable you can taste it and then when you finally get said book in your grubby little paws and you devour it and it is everything you could ever of dreamed of and more it is such a euphoric moment, one that never leaves you. A good book leaves an imprint for all the right reasons. But then sometimes you read the book and you're left with a funny taste in your mouth because really, in your opinion at least, it isn't deserving of the hype. It doesn't leave you with the satisfaction you were hoping for. It doesn't make you feel all the feels. It doesn't leave an impression on you at all apart from a sadness welling deep inside you because you feel disappointed.

We Were Liars is a book which has received a lot of hype lately. There have been countless reviews praising it, praising the ending which has been reported to be so shocking and life changing that it's hard not to get so excited about the prospect of reading it. But sadly for me, We Were Liars falls on the side of hype that is for me entirely un-justified and I cannot begin to tell you how much that saddens me. The cover is beautiful and it drew me in. The premise is so exciting... You know so little yet you know this earth-shattering moment is coming and the closer you get to the end you are closer to knowing what it is.

I don't know what it was but I just didn't get it. The book itself is beautifully written. Some of the scenes are so stunning, both visually and in the rhythm of E. Lockhart's writing. It's so lyrical, so addictive. But the subject matter just did nothing for me. Over privileged kids whining about what they didn't have when they have so much, and maybe that was the point but I just found myself getting so wound up. I didn't find myself remotely liking any of the characters or feeling any kind of feeling towards them.

And then there is the ending. I'm not going to say much about it because it's the books main point for marketing. It's reported as being earth-shattering, shocking but for me it fell a bit limp. I had kind of suspected what it was earlier on and then when it was revealed I just found myself saying I told you so. It just didn't have the intended effect on me. I don't know why, it just didn't. I know there are others out there who it did and I've spoken to several other bloggers about my experience with We Were Liars and as much as I didn't like it they loved it. And that is the beauty of reading. There's something for everyone. This just wasn't for me.
Posted by Ryan at 00:00