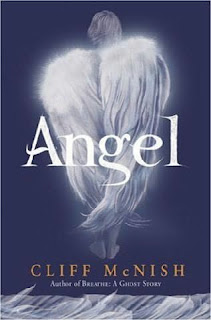 Written by: Cliff McNish.
Publisher: Orion Children's Books.
Format: Hardback.
Released: 7th June 2007
Rating: 4/5
Official synopsis: "It's been many years since fourteen-year-old Freya's life was ruled by an obsession with angels - an obsession which destroyed her family. She has a burgeoning social life at school, and feels adjusted in the world. But then the angels return, and Freya discovers that she herself is a guardian angel. What makes matters worse is the arrival of the strange new girl, Stephanie, who craves for herself the angelic power that Freya resists."
I know this book has been out for a few years now, but I re-visited this a few weeks ago and feel that I should review it (also I want some more content for my blog! :P)
Fourteen-year-old Freya has been ridiculed all her life. She's had a major obsession with Angels, claiming to see them, leading to her being institutionalized. Now older, and able to learn to keep her thoughts to herself, Freya begins to see angels again.
This book has to be an all time favourite. There are some quite haunting moments that make you near enough freeze with terror, and some moments where all you want to do is laugh.
Not only does Freya have to contend with the angels, but her father is gravely ill, and only her brother knows.
A main theme in Angel is of the need to belong, and to be normal. Freya never wanted a life like this, but at the same time, it is something that is so rare and so beautiful that she cannot help but relish in it.
Beautifully written, Angel is a book to read and read again. The characters are believable, and easy to relate to. And most importantly, the story is quite simply beautiful. And not only is it a book that teenagers and possibly adults alike will love, it is beautifully designed. The artwork is stunning. If you don't read it, you are missing out big time!
Buy from Amazon UK
Posted by Ryan at 19:40