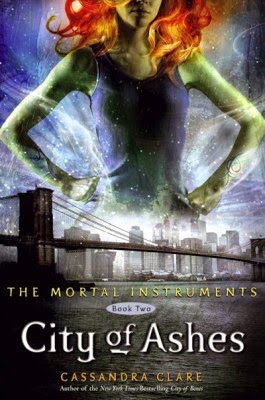 Official synopsis: "Clary Fray just wishes that her life would go back to normal. But what's normal when you're a demon-slaying Shadowhunter, your mother is in a magically induced coma, and you can suddenly see Downworlders like werewolves, vampires, and faeries? If Clary left the world of the Shadowhunters behind, it would mean more time with her best friend, Simon, who's becoming more than a friend. But the Shadowhunting world isn't ready to let her go — especially her handsome, infuriating, newfound brother, Jace. And Clary's only chance to help her mother is to track down rogue Shadowhunter Valentine, who is probably insane, certainly evil — and also her father. To complicate matters, someone in New York City is murdering Downworlder children. Is Valentine behind the killings — and if he is, what is he trying to do? When the second of the Mortal Instruments, the Soul-Sword, is stolen, the terrifying Inquisitor arrives to investigate and zooms right in on Jace. How can Clary stop Valentine if Jace is willing to betray everything he believes in to help their father? In this breathtaking sequel to City of Bones, Cassandra Clare lures her readers back into the dark grip of New York City's Downworld, where love is never safe and power becomes the deadliest temptation."

Boy oh boy, do I regret not reading this series sooner? I am a massive late comer to the series, only reading City of Bones last month, after the final book in the colossal six book series, City of Heavenly Fire came out, so I have A LOT of catching up to do! I plan to read a book a month so that I'll finish the series in December - the reason for this is I want to read other books too and feel like if I read them all in one go I'll gorge myself on everything Shadowhunter and give myself Mortal Instrument fatigue, and I don't want that to happen...

While I did find City of Ashes a little slow to start off with, once it got going I was pumped and had the pages turning so fast they were almost a blur. The thing about Clare's writing is that even when it's a particularly slow bit, it's still so enticing and it just captures you and pulls you in.

The characters really grow in this book and begin to shine even more than they did in City of Bones. I do have to say though, that I am very very VERY undecided on Clary. Sometimes I like her and think she's a great characters, but then there are other moments where I just cannot stand her. I don't know what it is - I did like the new dynamic between her and Simon but at times it felt a little forced.

However, that said the main plot of the book was fantastic and I am now gagging for book three! I really am so excited to see how this originally planned trilogy will continue and then how it picks up again in City of Fallen Angels. Luckily i have it on my shelf! Thank the heavens! See you here in September for my review of City of Glass! I cannot wait!
Posted by Ryan at 12:00