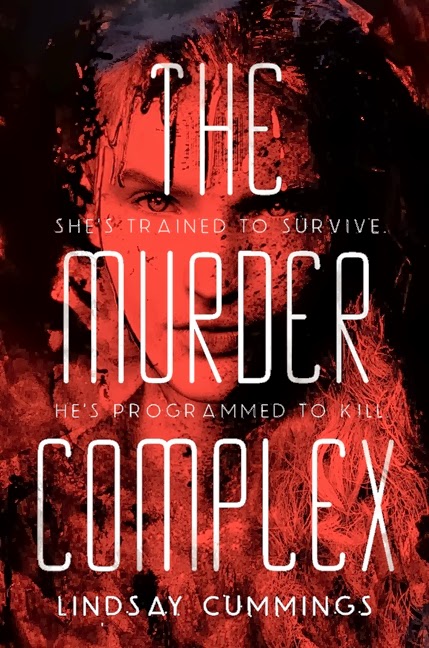 Official synopsis: "The Murder Complex is an action-packed, blood-soaked, futuristic debut thriller set in a world where the murder rate is higher than the birthrate.
Meadow Woodson, a fifteen-year-old girl who has been trained by her father to fight, to kill, and to survive in any situation, lives with her family on a houseboat in Florida. The state is controlled by The Murder Complex, an organization that tracks the population with precision. The plot starts to thicken when Meadow meets Zephyr James, who is—although he doesn't know it—one of the MC's programmed assassins. Is their meeting a coincidence? Destiny? Or is it part of a terrifying strategy? And will Zephyr keep Meadow from discovering the haunting truth about her family?"

I was lucky enough to get an e-arc review copy of The Murder Complex over Christmas last year and if it had been published last year you would of seen it on my end of year lists because I was absolutely floored once I had finished reading it.

It had first caught my attention several months earlier when I came across Lindsay's twitter account and saw her tweeting and I had seen a book called The Murder Complex on Goodreads and thought it couldn't be a coincidence... A little bit of research and I read up on the main idea of the book and I was sold instantly so when I got a copy thanks to Edelweiss I was beyond excited hence why I started to read it straight away and fell in love with the world captured within its pages.

Right from the off you're transported into the bloody world of murders, dead bodies lying in the street just waiting to be carted away, a fight to survive and the Initiative. The Murder Complex is told from two points of view, alternating every chapter between the feisty and ruthless Meadow, and the Jekyll and Hyde-esque Zephyr who is sweet and normal just like every other boy one second, and becomes a blood thirsty killing machine the next with a simple flick of a switch. Some will love the way the narrative changes every chapter and some might find it jarring but personally I'm in the former camp. I loved it. I loved that every chapter you're somewhere different within the Florida Everglades where the book is set. It was already great getting to see people that are so different from each other, a contrast I really liked. Meadow has been trained by her father to survive. The world in which we're drawn into in The Murder Complex is a world where the murder rate is higher than the birth rate, the population cannot keep up and bodies spill into the streets as the wards struggle to keep up with carting them away. That's what Zephyr is. A ward. He's determined to stay out of trouble, just keep his head down and get on with things. He has no family, just his friend Talan so does what he can to get by. Something else I loved about the dual narrative is that when things got really going and you're thrust right into the action, the fact that the next chapter could be completely different meaning you have to read a whole chapter before you can see what's going to happen next simply has you racing through the pages at break-neck speed to see what on earth is coming next.

I'm a big sucker for anything dystopian and The Murder Complex did not disappoint. The Murder Complex itself and the Initiative had me reeling as revelation after revelation came knocking me for six and demanding that I turn the pages quicker to see where it was all heading. At the time of reading the book I wasn't sure if it was a one off or part of a larger series and I have to say upon finishing this book, quite early in the morning if memory serves me correctly, that I was chomping at the bit to read more. It felt like there was more to be told, that the bits and pieces that were hazy, missing, still needed to be elaborated on. And thankfully it looks like we'll get the answers we are craving! Earlier this month, The Fear Trials, a prequel novella was released and Lindsay announced a few months ago that had handed in the second Murder Complex book to her editor and I couldn't be happy. I've seen some reviews that they weren't happy with the romance in the book and whilst I have to say I prefer my books to be romance free, especially if it's going to soppy, but I liked it here. It felt well placed and gave a good contrast to the dark, gritty and bloody world. You needed a few lighter moments here or there to give you a moments peace, a deep breath, before it all kicked off again.

A word of warning for those that are squeamish... There is blood and lots of if in the book. I personally found it so disturbing that people just go around killing one another. It's dark, scary and twisted and at times some of the deaths were so violent I would find myself holding in a breath in the hope that it'd pass and I could continue. Some scenes left me breathless, gasping for air as I saw them all play out in my minds eye. These scenes were so well written and crafted in such a manor that they leave a lasting imprint on you that lasted several pages after you'd read it and just showed just how dark the world has become.

All in all I have to say that I think this book is a stunning debut. It's well-written, fast paced, chock full of action sequences that will have readers racing through the pages. It's honestly one of my favourite books I've read this year, even though I read it last year... But it's published this year, so it counts! Haha. Just go get it! It doesn't currently have a UK publisher but it is available on Amazon both for Kindle and hardback imported from the US of A which I've seen pictures of and it looks stunning. I cannot wait to get my copy and I cannot wait to see what's next in store for Meadow and Zephyr!

The Murder Complex is out TODAY! So go and check it out!

Thank you to Edelweiss and the HarperCollins US team for allowing me to read such an awesome book!
Posted by Ryan at 23:00