All The Bright Places by Jennifer Niven [Review] 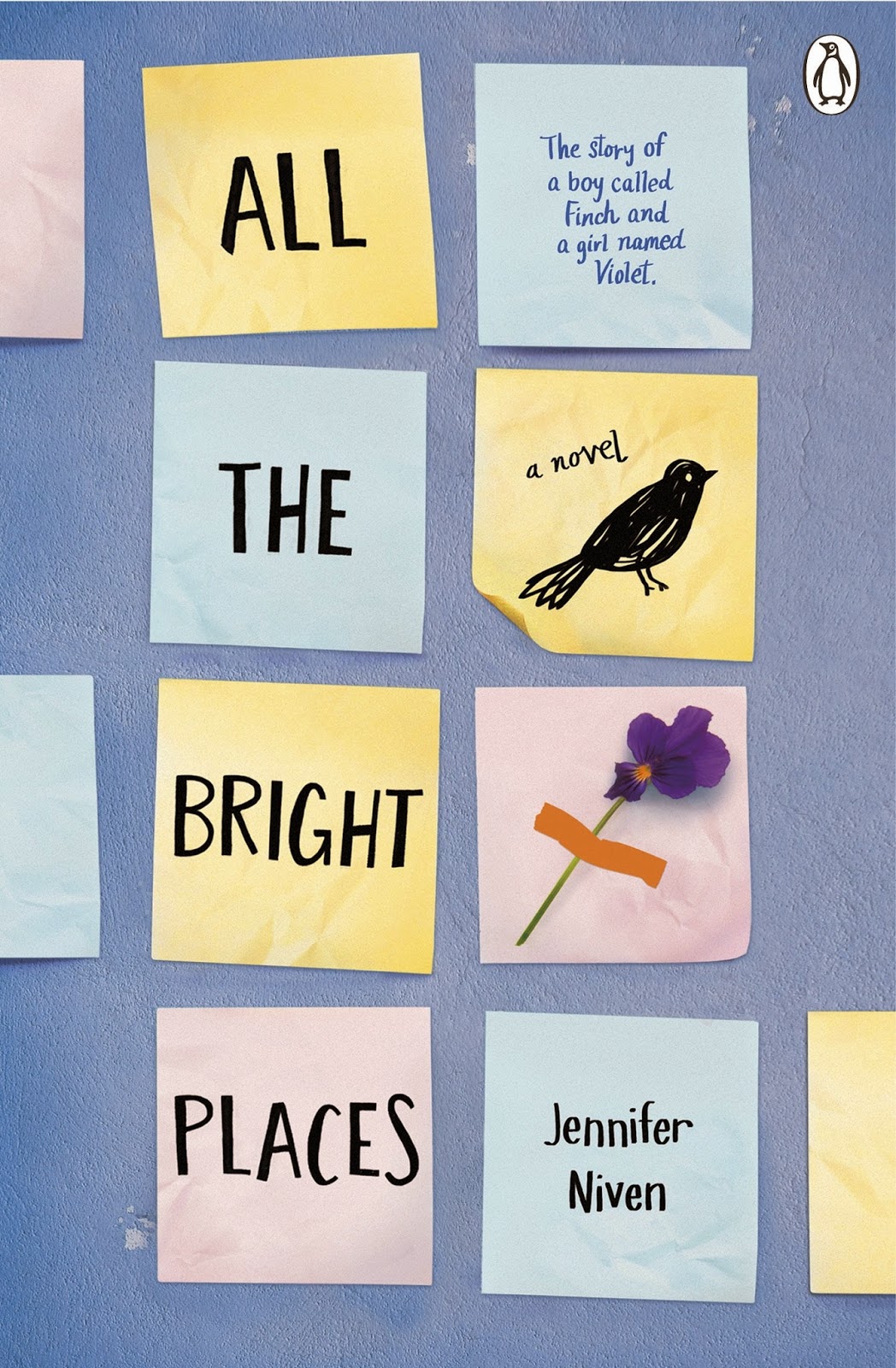 Official synopsis: "Theodore Finch is fascinated by death, and he constantly thinks of ways he might kill himself. But each time, something good, no matter how small, stops him. Violet Markey lives for the future, counting the days until graduation, when she can escape her Indiana town and her aching grief in the wake of her sister’s recent death. When Finch and Violet meet on the ledge of the bell tower at school, it’s unclear who saves whom. And when they pair up on a project to discover the “natural wonders” of their state, both Finch and Violet make more important discoveries: It’s only with Violet that Finch can be himself—a weird, funny, live-out-loud guy who’s not such a freak after all. And it’s only with Finch that Violet can forget to count away the days and start living them. But as Violet’s world grows, Finch’s begins to shrink."

From the first moment that I heard about this book, in an email from Carolyn at Puffin, that I knew I had to read it and I also had an inkling that it would either be a book I would totally adore or one that I hated. It sounds amazing, don't get me wrong... But a kid who is fascinated with his own mortality and wanting to kill himself... I just didn't know how I would feel reading a whole book like that or even if I would be able to make it all the way through. Yeah, the packaging is pretty but what about the contents?

I have to say that my concerns were ill-conceived and the book itself is, in fact, an absolute masterpiece. A stroke of genius. It's wonderfully, beautifully, written. It's evocative and thought-provoking and had me questioning so many things, aspects, of my own life and the people around me.

From the second I started reading I was so engrossed in Finch and Violet, in their blossoming relationship and the way they are perceived by those around them. This is the sort of life-consuming read that completely takes over your life. I could not stop reading and at one point crying! It's emotional and so charged that I still, a few weeks after reading it, feel deeply affected. As someone who has had to deal with issues on a similar (although not as drastic, I might add) scale, the book felt incredibly real and raw to me. I felt like it was talking directly to me, that Finch was talking to me, that Violet was sharing herself with me. The book deals so well with mental health issues, suicide and the grief that follows the death of a loved one. It covers a whole range of emotions and at times left me breathless as I recalled thoughts and feelings I had had - thoughts and feelings that had made me feel so alone but I now know are shared the world over, and this book was the key to that.

I am not normally a fan of a two-narrative driven story. I don't think they work that well most of the time, but when it is right, it's right. And fortunately with All The Bright Places, it most certainly is right. Finch and Violet both have such distinct voices that there is no confusing one for the other. They both feel so fleshed out. I really liked how they came to know each other so well because they both had the same intention before Finch talks Violet out of doing what she was intending. But because Finch is the school clown, mocked and laughed at, of course the story is given a completely different spin and as far as their fellow pupils are concerned, Violet has just saved his life, not the other way round like it really was. It is this chance encounter that brings them closer, starting a relationship based on exploration, one that is about finding the happier moments in life.

Ultimately, the ending was very unexpected for me. I didn't think it would end the way it would, but it left me in absolute pieces. Really, I was ruined when I finished the book, I turned over the page and almost yelled, demanding more. I needed more. It couldn't end there, there had to be another part somewhere and my copy had been misprinted? It had to be. That to me is the sign of a good book, when you're gasping for more, even when all the plot lines have been tied together into a neat ending, and you still want more. Even if it's mundane, so far removed from the book, you just want more.

This book would be perfect for people that liked The Fault in Our Stars, or just for anyone who needs a little enlightenment in their life. Honestly, please just pick this book up. It is a life-changing experience that you should not miss out on.

My thanks to Carolyn at Puffin for my copy - I will cherish it for years to come! Thank you!
Posted by Ryan at 08:00