More Happy Than Not by Adam Silvera [Review] 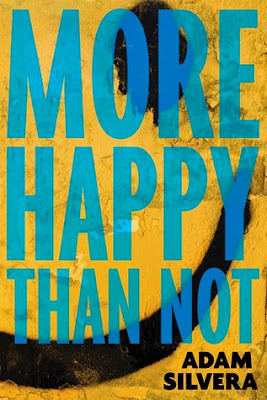 Official synopsis: "The Leteo Institute's revolutionary memory-relief procedure seems too good to be true to Aaron Soto -- miracle cure-alls don't tend to pop up in the Bronx projects. But Aaron can't forget how he's grown up poor or how his friends aren't always there for him. Like after his father committed suicide in their one bedroom apartment. Aaron has the support of his patient girlfriend, if not necessarily his distant brother and overworked mother, but it's not enough.  Then Thomas shows up. He has a sweet movie-watching setup on his roof, and he doesn't mind Aaron's obsession with a popular fantasy series. There are nicknames, inside jokes. Most importantly, Thomas doesn't mind talking about Aaron's past. But Aaron's newfound happiness isn't welcome on his block. Since he can't stay away from Thomas or suddenly stop being gay, Aaron must turn to Leteo to straighten himself out, even if it means forgetting who he is. Adam Silvera's extraordinary debut novel offers a unique confrontation of race, class and sexuality during one charged near-future summer in the Bronx."

When a book turns up in the post that you have been dying to read for a very long time, like a year or more, there are always a mixture of feelings that run through you. Excitement that it is finally here. Admiration at that BEAUTIFUL cover art you are finally seeing on a lovely finished copy. But also a feeling of fear. What if the book you've been building yourself up for doesn't live up to your expectations? What if the book falls short of what you were hoping it would be and you wish you hadn't bothered? I had all of these feelings when my copy of More Happy Than Not FINALLY turned up! I'd been following Adam on Instagram and Twitter for a very long time, ever since the book was initially announced. I'm not sure how I found him, but he's amassed a very big following, way before publication and the more I heard and saw of the book the more I could not wait to get my grubby paws on a copy!

I'm not going to lie, I was slightly worried to start this book. I wanted to like it so bad that I just hoped it was going to live up to what I was hoping it would be. I'd read reviews from some people in the US where they sent out review copies ahead of publication, and the pre-publication buzz was phenomenal for this book, surely all those people couldn't be wrong, could they? Well as it turns out, no they were not wrong, and I had nothing to worry about, because as soon as I started to read, Aaron's voice took me over completely and I was compelled to continue on his journey with him.

The book surprised me completely. Totally surprised me. It went in a completely and utterly different direction to the one I had been expecting and I am grateful for that. This is not your average "Oh I'm gay, I'm falling in love with a guy that doesn't love me because he's straight" LGBT kind of story. Anything but. This is a story about a boy who firmly believes he is straight until he meets Thomas who changes everything. And the TWIST!!!! Oh man the twist! I was sent reeling! I'm not even going to lie, once the twist kicked in, about 150 pages from the end I literally wanted to throw the book across the room and take a break because I could not handle it! I did not see that coming in a month of Sundays and I absolutely loved it. Honestly, guys, it will blow your mind!

The book reads like a contemporary  but there is a science fiction element that I really enjoyed and found intriguing. Memory alteration has been achieved. Revolutionary neuroscience has meant that the ever growing Leteo Institute can relieve you of unwanted and painful memories that are impeding your quality of life.

The writing is immaculate. It's almost lyrical and so captivating, Aaron's voice so clear and fresh and accessible. Aaron feels so relatable, especially I guess, coming from someone who has also struggled with their sexuality, I get where he's coming from and the things he thinks and feels. It meant that I really got into Aaron's head and he got into mine. His fears and feelings mirrored some of those I had years ago when I struggled and the book itself made me question how I would react if I were in Aaron's situation. Thankfully, I live in a part of the world where I'm not that likely to be beaten like Aaron because I'm gay. But that is the beauty of reading and it is something that Silvera has done so, so well. Any author who is worth their salt will totally transport you into this world, into the characters and make you think and feel and question. It was so easy for me to put myself into Aaron's world and wonder what it would be like to walk the streets and have to completely hide everything I am and ever will be. It was almost a terrifying experience as I don't think I'm as strong as Aaron and most definitely wouldn't be able to face it as bravely as he does at points in the novel.

There is a great cast of characters too. Some of the side characters, Aaron's friends, such as Me-Crazy, Brandon and the whole ensemble kind of blended into each other at times and I did find myself struggling to remember who was who and who had said what, but the main cast are all so well defined. Of course, there's Aaron. But Genevieve, Aaron's current girlfriend, Thomas, Aaron's new best friend who he finds himself falling for, and Aaron's mother and brother, Eric, all have their roles to play in pulling the story forward to a conclusion that actually made me feel pretty sad. I won't lie, it's kind of bleak but it's also kind of freeing and happy at the same time. You'll get what I mean if you read the book. Part of me really, really, REALLY, wants to demand a sequel. To see what happens next. To see if Leteo can put right their wrongs, but then part of me wonders how that will work as I feel the real message of the book has already been shown. You can hide, and pretend, and even go to extreme measures to try and change who you really are. But you can never hide well enough, you can never pretend without slipping up at some point, and extreme measures never seem to end so well. Trying to change who you are is impossible and you need to find the happiness in what you've got, rather than what you haven't got.

I also found the dynamic between Aaron and his recently deceased father incredible to read. My own father has never been anything other than supportive of me, but I know that that isn't the case for everyone and sometimes things are so bad that there is no way to repair it. But how would you cope, knowing that your father hated you so much that he'd rather be dead? It's something that is hard to think about but that's the beauty of this book. It is highly thought provoking and engaging.

I cannot stress how important books like this actually are. They're real, and honest, and more often than not, they're life altering. If this book had been around when I was growing up and coming to terms with myself I would of devoured it and loved every second, only adding fuel to the flame that was inside of me just waiting for its time to shine. Books like More Happy Than Not help people and they shouldn't be shied away from or denied! I cannot recommend it enough, every time I see someone on twitter or goodreads say they've got it or they have started reading it I just get so excited and know they're about to read something truly wonderful. I cannot thank Adam enough for writing such a stunning book, and look forward to reading his next book History Is All You Left Me, which is due out in 2017! It's a long wait but I'm certain it will be worth it!
Posted by Ryan at 11:00