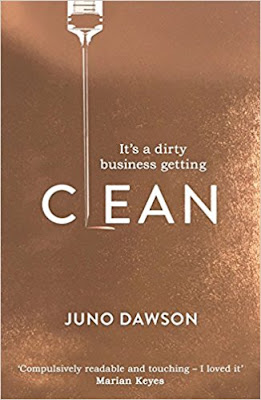 Official synopsis: "When socialite Lexi Volkov almost overdoses, she thinks she's hit rock bottom. She's wrong. Rock bottom is when she's forced into an exclusive rehab facility. From there, the only way is up for Lexi and her fellow inmates, including the mysterious Brady. As she faces her demons, Lexi realises love is the most powerful drug of all... It's a dirty business getting clean. Addiction and redemption, love and despair. Clean will have you hooked from the first page."

I've been a long term Juno fan now, since the days Hollow Pike was released, way back in 2012 (has it really been 6 years? YIKES! Time flies!) and haven't been able to get enough since. From witches, to hauntings, from murders by the poolside, to tattoos that take over the mind, Juno is in a league of her own and in Clean she really shines. In what is, in my humble opinion, her best book yet, Juno tackles the tricky world of addiction and recovery.

Featuring a cast of the rich and privileged. A sharp protagonist in the form of Lexi who is used to having everything handed to her, so when we meet her, waking up in the back of her brothers car with no idea where she is going we know that things are about to kick off. Forced into a rehabilitation facility against her will, Lexi is furious and the language and thoughts of someone being forced into something they really do not want to do were perfectly captured and Juno did an excellent job of showing Lexi's anger without it going o.t.t, but still being a explosion of feelings. Whilst she may seem, on the surface as the stereotypical spoilt child of a multi-millionaire (think Nicole Richie, Paris Hilton...) as the book progresses we see that Lexi is actually an incredibly three-dimensional character and I loved her back story. By the end of the book I actually found myself really rooting for her, despite hating her in the first few chapters of the book.

The book itself deals with many different forms of addiction. Drugs. Food. Sex. All have addictive qualities and all are explored in the book with varying scenarios and outcomes. It was fascinating to see inside the mind of someone who is addicted to something and then to see them work through their recovery. The book is split into ten sections, steps, each one dedicated to a step in a recovery programme and this really added to the feel of the book and I looked forward to the next one popping up to see what the next step was.

The exploration of mental health was also expertly done. So often, mental health is swept under the carpet and ignored, but here it is front and centre and dealt with so well that many teens, and indeed adults, who will read Clean will find themselves a place  of understanding in this book that made me, for one, feel as though I'm not alone.

Something this book also does incredibly well is trans reputation! And it is about damn time! Kendall is trans but it's all so natural. It's just a fact. It isn't something that is questioned, the interactions between Kendall and the other characters are so fluid and natural and real, just the way it should be in real life with any human being. Hopefully trans readers who have never seen themselves represented in any way shape or form before may come to Clean and see that, yes, while Kendall has her problems, she's real and human and has just as much right to live her life as anyone else. Bravo, Juno!

AND THAT COVER!!!! LORD THE COVER!!!! Rose gold! I have the proof (with a finished copy on pre-order, obvs...) which is a little different with a white cover, rose gold text and words written in this glossy effect that you can only see in certain light, but the cover for the finished book is rose gold foil and I can't wait to see it for myself, because you know it's going to be STUNNING!

As ever with Juno, her writing is witty, sharp and encapsulating. I found myself unable to put the book down. Pardon the pun, but it's an incredibly addictive read that will have you glued to the page. Thank you so much for sharing another awesome book with us. Here's to many, many more!