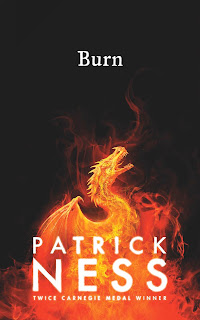 Official synopsis: "In 1956 Sarah Dewhurst's father shocks her by hiring a dragon to work the farm. The dragon is a smaller blue rather than the traditional larger reds, though even the reds are now scarce. When the blue dragon, Kazimir, unexpectedly saves Sarah and her friend Jason Inagawa from the attentions of the racist police deputy, Kelby, everything changes. Sarah is part of a prophecy and she must escape the clutches of Malcolm, an assassin from a Believer Cell, the dragon-worshiping cult. When Sarah, Malcolm, and Kazimir eventually converge, they are thrown into another universe, where dragons seem never to have existed. Can they save this world and the one they left?"

I tore through this one. I knew that I would enjoy it... Come on... It's Patrick Ness for goodness sake. Can he do no wrong? But I didn't expect to love it as much as I did.

I was sold as soon as I heard the word "dragon" mentioned when the book was announced and I have to say that this book completely exceeded my expectations, in the sense that it wasn't what I expected at all. It didn't feel so much like a fantasy as I had expected. Yes, there were fantastical elements but it all felt so real. As if it was right that the dragons were a part of our world, and why would it be questioned?

I fell in love with Sarah as a protagonist, her attitude, the way she carried herself, her ability to not let her fathers feelings of dragons influence her own. And speaking of dragons, how could you not just want more and more and more of Kazimir?

I loved that it tackles a lot of different subjects. Racism. Homophobia. There are still echoes of what happened in World War 2 and with the treat of a cold war looming, the tension is palpable.

As ever, there is always a little weirdness to Patrick's books and I love how, much like Release there is a second story going on away from the main focus point of Sarah and the dragon. Following FBI agents Dernovich and Woolf was a ride on its own.

All in all this is one not to be missed and I thoroughly enjoyed every single second! An exhilarating read!
Posted by Ryan at 07:00