The Death Cure, the third and final book isn't even out in the UK until next month (5th April), yet things are already hotting up for James Dashner's next book (quite literally when you see the cover...). I think I posted about it before, probably haven't... I don't know. But it's called The Kill Order, and it's published in America on 14th August. Of course, thanks to the Book Depository, UK readers, and readers worldwide will also be able to get the book from that date too! YES! Mine is pre-ordered!

The Kill Order is set to act as a prequel to The Maze Runner trilogy (The Maze Runner, The Scorch Trials and of course, The Death Cure). Well, just twenty minutes ago, James himself blogged about the cover art for The Kill Order, unveiling it in all of his glory and boy is it stunning!!! 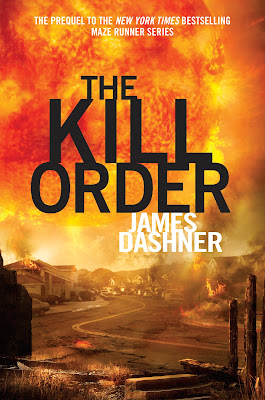 It's been done by Philip Straub, who did the artwork for the original three books too. It fits in with the art for the trilogy, but you can tell that it's from an earlier time. I love the great big fireball and the utter destruction! ARGH! I CANNOT WAIT!

The Maze Runner is set in a dystopian future America, where illness has ravaged the population and weird organisations have set up to do lots of testing to see if they can find a cure... Well, James has revealed that The Kill Order will give us an insight into how it all happened and just how horrific it was. I for one cannot wait to read it! What do you think of the cover?

Pre-order from The Book Depository
Posted by Ryan at 14:27