The Rise of Nine cover art!

Okay, so last week the US cover art was released for Pittacus Lore's The Rise of Nine, the third book in the awesome Lorien Legacies series. Due to be published 21st August in America, and 30th August over here in England, the US copy looks a little like this... 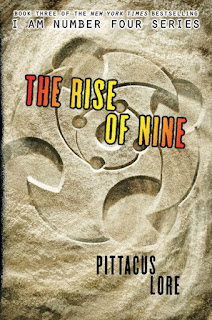 I like the whole stony, kind of desert-ish feel to it. But the colour of the title just puts me off. It'd be so nice otherwise. And the whole placement of the text. It covers the logo for Number Nine! No!!!


Anyway, now, the UK covers have been released, and as with the past two books, we're getting two covers. An adult edition and YA edition! 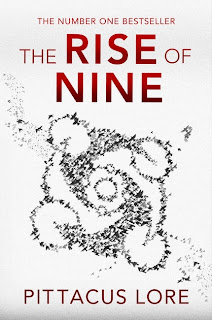 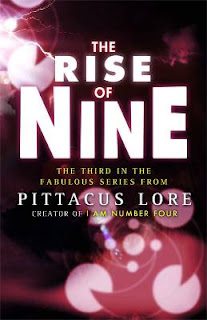 Now, I like both covers for different reasons. The adult edition is quite simple, and while it doesn't match the previous two covers so much, it's snazzy. I like that the logo for Nine is made of birds, and wonder what this means for the book. But I don't like how RISE and NINE are big and the and of are small. Kind of weird looking. But still. And it matches the review copies I have so that's a bonus.

And then the YA cover. I like that it's colourful and it matches the cover art we got for The Power of Six. Overall, very very good and I cannot wait to read the book when it comes out!
Posted by Ryan at 21:24

Labels: 2012, Cover Art, I Am Number Four, Pittacus Lore, The Power of Six, The Rise of Nine