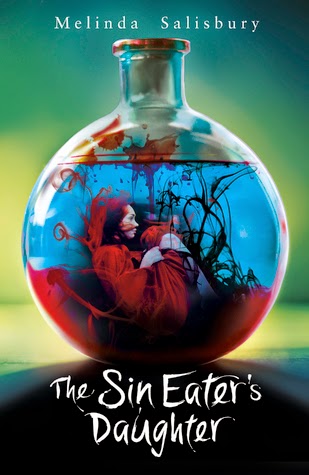 Official synopsis: "Seventeen-year-old Twylla lives in the castle. But although she’s engaged to the prince, Twylla isn’t exactly a member of the court. She’s the executioner. As the Goddess embodied, Twylla instantly kills anyone she touches. Each month she’s taken to the prison and forced to lay her hands on those accused of treason. No one will ever love a girl with murder in her veins. Even the prince, whose royal blood supposedly makes him immune to Twylla’s fatal touch, avoids her company. But then a new guard arrives, a boy whose easy smile belies his deadly swordsmanship. And unlike the others, he’s able to look past Twylla’s executioner robes and see the girl, not the Goddess. Yet Twylla’s been promised to the prince, and knows what happens to people who cross the queen. However, a treasonous secret is the least of Twylla’s problems. The queen has a plan to destroy her enemies, a plan that requires a stomach-churning, unthinkable sacrifice. Will Twylla do what it takes to protect her kingdom? Or will she abandon her duty in favor of a doomed love?"

First off I have to say that as soon as I saw the cover for The Sin Eater's Daughter I totally and unquestionably fell in love. I didn't know what the book was about and when I first saw the cover I had never heard of it but as soon as the striking image of a girl in a bottle with blood swirling around her popped up on my twitter feed I just had to know what the book was about and from the moment I found out I CRAVED this book. Literally, I craved it! I needed it. I had palpitations, I had cold sweats at night when I woke up with a start realising I didn't have the book, I just needed it. And then when I got it and finally read it something clicked and it all just fell in to place.

This book is a masterpiece. It is beautifully written. Lyrical and smooth, it flows from and before you know it you've read a sizeable chunk when you only promised yourself one chapter before bed. One turned into two and two into three.

I have to say I had high expectations going in because it sounded so good and I had hoped it would be. I loved it from the start to the finish - and boy that ending, it has me begging for book 2 just to find out what happens next let alone how the story itself continues! I need to know what happened in those next few seconds after this book closes!!! ARGH!

The characters themselves are fantastic. I grew to love Twylla, despite her self-importance that at times drove me mad, and I absolutely despised the queen. God, what an awful woman she is! Violent, quite clearly insane and deathly dangerous, she is not a lady to be messed with.

The fantasy elements were so perfectly done and I love the back story, to Twylla, and the whole reason for a Sin Eater in the first place and what they do and why. It was great fun getting to learn about a new world that feels fun and fresh but yet at the same time has its dark undercurrents that make you think twice!

I for one cannot wait for book 2 and if it is as good as it's predecessor, both in plot and in execution (pardon the pun, considering the content of the story...) then it is sure as hell going to be worth the awfully long wait we are now being subjected too!
Posted by Ryan at 08:00