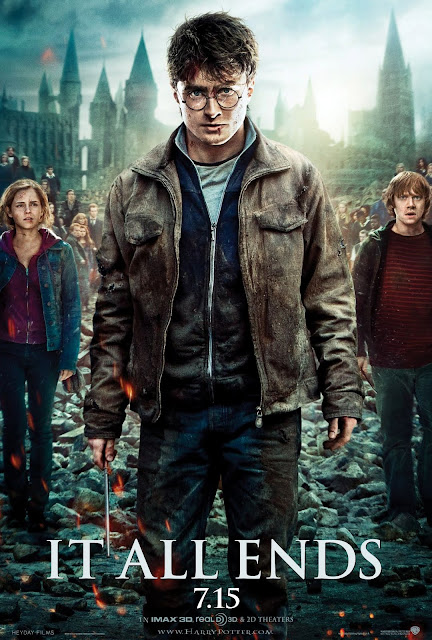 Last night, I went to the cinema to confront something so terrible, so heart-breaking and yet so beautiful. And that thing? The end of my childhood. AKA... Harry Potter and the Deathly Hallows Part 2.
It felt really weird in the hours leading up knowing that I was finally going to see those scenes with my very own eyes. It was just so... incomprehensible! After initially reading the first 2 books in 1999 shortly before the release of Prisoner of Azkaban I have been hooked. I have since re-read them and loved them even more than the first time, as I think as an 8 year old I couldn't truly appreciate them as much as I could later on. Anyway... it was thanks to my nan that I read the books as she brought them in a boxset. Still have those copies to this day and they are a little dog-eared so I think I should soon invest in some new copies, hardback of course! Accept no imitations people! She and my uncle took me, along with my sisters and cousin, to see the first two films, and the fact that she's no longer here also makes this a little bit raw. It's because of her I was introduced to the wonder of Harry Potter so she has a lot to answer for!! Anyway, I'm digressing again...
Harry and co have been a constant figure head in my childhood. From reading the books, to seeing the films, from 1999 to today, it's been 12 years. Wow! Really?! That's gone so fast when you think about it. But it's my entire childhood. From boy, to man, although I don't feel that grown up. Hm, the less said about that the better! The books have been there through good and through bad. Like an old friend, they always greet me in a warm embrace (chilling when Voldemort happens to rear his ugly head) and give me hours of happiness, even though I've read the books dozens of times each.
This film has to be, for me, possibly the truest to the book they have been since about Prisoner of Azkaban. The subsequent books seemed to lose a little essence of the plot, but Deathly Hallows Part 2 had the rawness, the emotions and the heartache of the final half of the book. When I was watching it, I completely forgot about the book. The film one hundred percent sucked me in and I forgot everything.
The effects were stunning. Absolutely perfect, and in 3D it was beautiful. The scenes in Gringotts were brilliantly handled and seeing the cover art for the UK Children's edition (the one I have) actually on screen, in action, made me a little giddy with excitement. That was one of the scenes I'd most been looking forward to! Then the battle itself. What can I say but... AMAZING! Really. It was handled beautifully. Going in to watch this film, I was possibly the most nervous I have ever been about seeing a film adaptation. Those scenes had to be done just right or the whole film, the entire series would of been a complete waste of time. If they weren't going to be done right, they shouldn't of been made at all. But they were brilliant. The curses in 3D. The destruction in 3D. Everything. I was blown away.
AND THE MUSIC! ALEXANDRE DESPLAT DONE GOOD! So epic!
I am something of a Harry Potter stan, so this was a massive deal for me and I cannot thank Warner Bros, the cast and of course everyone included in making the film, as well as the legend herself, JK Rowling. This has brought my childhood to a satisfying conclusion and has brought possibly my most favourite book and film series to a stunning end. I for one am happy, and shall be going to see this film as many times as possible in the cinema, and then I shall watch it again and again when it's out on dvd!
Posted by Ryan at 18:56