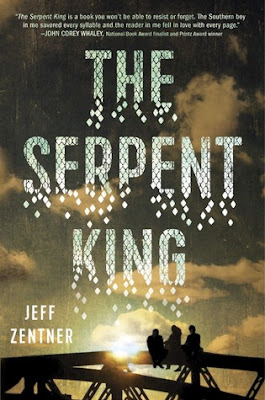 Official synopsis: "A dark, southern gothic novel about small-town dreams, love and grief. Dill's father is in jail for an unspeakable crime. Shunned by the neighbours in their small religious Tennessee town, Dill and his mother try to make ends meet.  Dill’s only respite from poverty and prejudice are his two friends: Lydia and Travis. Travis is an oddball, finding sanctuary from his violent father in his obsession with an epic fantasy saga. Lydia is fast-talking and fiercely creative, pinning her hopes on her achingly cool fashion blog. Dill fears his heart will break when she escapes to a better life in New York. Dill wants to get through his final year of high school in one piece. But there’s a dark secret at the heart of his family, a serpent poisoning his blood, filling him with despair. Dill must confront this legacy of madness and desperation before it tears him apart."

Now, I don't know know about you, but I personally like to start the reading year with a bang. I like to start it off reading something that I just have a good feeling about, something I just have this inkling will be special. And for me this year, the choice was The Serpent King by Jeff Zentner. I had heard about this book on twitter when I found Jeff's account and followed him. The book sounded amazing, but at the time I didn't know it had a UK publisher, so resigned myself to wait for the US edition to be released so I could import a copy. Then, one afternoon I was browsing Netgalley, and low and behold the book was available for download, an e-arc from the UK publisher, Anderson. I freaked out, downloaded it and decided to read it asap. As it was, I planned to read it over my Christmas holidays, but due to real life and just generally being busy, I didn't have as much time as I would of liked, so the majority of the book was saved for New Years so I could really start the year of special.

And everything about The Serpent King is special, let me tell you. Right from the word go, the writing is so lyrical and beautiful that Jeff drew me straight into Dill's story. I fell in love with Dill, and took an instant dislike to his parents. I'm always against parents who think that just because their life sucks, their kids should to. No. Just no! But it wasn't just Dill I fell in love with. There was a whole range of characters for you to love. Feisty Lydia who is determined to make something of herself. Nerdy Travis, who I am not ashamed to say I related to quite closely, his Bloodfall obsession mirroring mine for Harry Potter and many more. Lydia's parents. Travis' mum who I really felt for. But also the setting. The book is set in Forestville. A small town in the middle of nowhere, where everyone is up in everyone else's business. You can't go out the house without seeing someone you know, and someone who knows everything about you, your deepest, darkest parts that you just cannot get away from. The setting is described so beautifully that I almost felt like I was there. It feels authentic, this little town where everyone makes their decisions always keeping in mind that God is watching and that they want to live good, honest lives.

You see, Dill's father is in prison. Once the head of his own church he has fallen from grace, and left his wife and son to pick up the pieces on the outside world. But Dill is growing tired of this, and with the prospect of losing his best friend on the horizon, he is desperate to do something, anything that would make it all okay. He's always been into his music, songwriting and singing, but always alone in his bedroom, he hasn't performed in public since his fathers church fell. But when Lydia gives him her old laptop and instructs him to record himself, she uploads the videos to YouTube and Dill begins to see a light at the end of the tunnel and starts to take his life into his own hands, doing what he wants to do, rather than what his parents what him to do.

Lydia on the other hand is already doing what she wants. Having run a successful fashion blog for several years, it's never been a question of if she will go to college. It's just which one, and when she has made up her mind, she's determined. But she's also scared. Scared of leaving her friends behind in this horrible little place. Scared that she will move on and make something of herself while the people she loves festers and just stays put.

Travis, the character I related to a lot, is obsessed with books. Well, one series in particular. The Bloodfall series. I really liked that at the start of each chapter about Travis, there was a little snippet from the fictional book and felt this added a really great element into the story and was also relevant to the events going on.

Religion plays a big part in the book, and to start with I was a little hesitant about this. I make no bones about the fact that I am not religious, and I have read some books that focus on religion and it feels like a stifling factor, like it is constantly rammed down your throat. But in The Serpent King, it works, and it feels like it is something being questioned, rather than being reached. Dill's father led a group of people who passed around venomous snakes and drank poison, but Dill never really felt like he was part of it. His parents are still deeply religious, and when his mother begins to question his motives, and blames him for everything that has gone wrong, you really see a shift in his mindset and I loved seeing this.

The Serpent King, is, in essence, a coming of age story. A story about three friends who want to find their way in the world, stuck in a little town and with way too much baggage for them to handle alone. It has it's dark moments, I'll give you that, but it is also incredibly light in places, hopeful, and it definitely tugs at your heartstrings more than a couple of times. I actually cannot begin to recommend this book highly enough. I've been tweeting Jeff all the way through reading the book, so I'm sure he knows how I feel already, but I cannot thank him enough for such a beautiful reading experience and such an incredible journey. Memorable characters, beautiful prose. And some sentences in here to die for! One in particular I tweeted Jeff straight after reading it, proclaiming it to be one of the most beautiful and poignant sentences I have ever read and it'll stick in my mind forever! You'll know the one when you read it, trust me!

The book is out in March and it is one not to be missed! Trust me, please just do not miss out on this wonderful, wonderful book!

My thanks to Anderson/Penguin from whom I got the e-arc in exchange for an honest review.
Posted by Ryan at 17:00