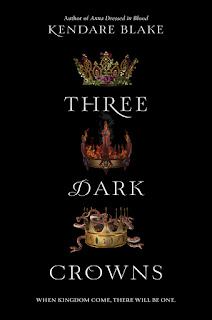 Official synopsis: "Every generation on the island of Fennbirn, a set of triplets is born: three queens, all equal heirs to the crown and each possessor of a coveted magic. Mirabella is a fierce elemental, able to spark hungry flames or vicious storms at the snap of her fingers. Katharine is a poisoner, one who can ingest the deadliest poisons without so much as a stomachache. Arsinoe, a naturalist, is said to have the ability to bloom the reddest rose and control the fiercest of lions. But becoming the Queen Crowned isn’t solely a matter of royal birth. Each sister has to fight for it. And it’s not just a game of win or lose…it’s life or death. The night the sisters turn sixteen, the battle begins. The last queen standing gets the crown. If only it was that simple. Katharine is unable to tolerate the weakest poison, and Arsinoe, no matter how hard she tries, can’t make even a weed grow. The two queens have been shamefully faking their powers, taking care to keep each other, the island, and their powerful sister Mirabella none the wiser. But with alliances being formed, betrayals taking shape, and ruthless revenge haunting the queens’ every move, one thing is certain: the last queen standing might not be the strongest…but she may be the darkest."

Three dark queens
are born in a glen,
sweet little triplets
will never be friends.

Three dark sisters
all fair to be seen,
two to devour
and one to be Queen.

I mean if that doesn't get your heart racing and make you want to read this book, I don't know what the hell will! That was the first thing I heard about this book and it had me yearning to read it, so when Pan Macmillan reached out to me asking if I'd like to see an early copy, the answer was a resounding HECK YEAH I WOULD, THANK YOU VERY MUCH! And I have to say it didn't disappoint. If anything, Three Dark Crowns exceeded what I thought it would be. I knew it would be dark and it would feature a fight of some sort for a crown, but what we actually get is so, so much more. It's way darker than I imagined. The scenes where Katharine, the poisoners queen, is forced to eat a lot of food that has been laced with various poisons seemed so barbaric and medieval and so out of place with the way we are used to seeing royalty be treated.

The book itself follows three sisters, triplets who are all queens and heir to a throne that only one may possess. Each of the sisters has their own gift with varying strengths and weaknesses - from ingesting poison, to controlling the weather, to befriending creatures great and small - and are preparing to battle it out to the death for their right to sit on the coveted throne.

The world building is immense as we get to explore a world that feels medieval and fantastical.  The writing is beautiful and once you get used to the fact that the POV changes near enough every chapter you stop noticing the change and just go with the flow of the book itself. I personally really enjoyed it and loved every single page. It completely drew me in from the get go and had me racing to see what the sisters and their entourages were going to do next. Twists and turns a plenty and a touch of romance that doesn't feel like too much, which is sometimes a danger I think. Sometimes romance is kind of shoehorned in but with this book it works and it isn't too much! So kudos to Kendare for that! With the promise of a second book, One Dark Throne, due next year I cannot wait to see how this is all going to play out after that ending! Argh! I for one cannot wait and highly recommend that you all go out and get a copy right NOW!

Stunning. Dark and incredibly creepy. The perfect read for a dark, winters night with a cup of something warm!

In the UK we are super lucky and have three stunning covers to chose from, each based around one of the three queens!

Which one is your favourite? Mine is the poisoner cover, obviously featuring the snake! Pick your favourite and be sure to share your choice!

My thanks to Catherine at Macmillan for thinking of me and emailing me about this book and for my copy!