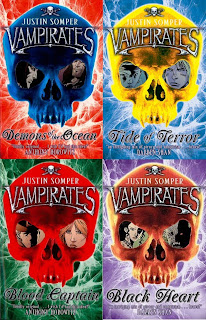 Now, I am a massive massive massive Vampirates fan. I have been ever since the first book, Demons of the Ocean was published in June 2005. The artwork was dark, brooding, and so stunning, it just caught my eye at first glance. I'd also seen Justin talking about the book on Blue Peter and it sounded brilliant, so I knew I had to have a read. And I was not disappointed on iota.
Demons of the Ocean opens with Grace and Connor becoming orphans after their beloved father, and Lighthouse Keeper, dies. They have no other family, and so have nowhere else to go. And rather than be put in the children's home, they make a dash for it and head out to sea. But things all go quite wrong, very fast. There is a storm and the twins are ship-wrecked, separated, each fearing that the other has died.
Connor is saved by Cheng-Li. A brooding Chinese pirate aboard The Diablo. There he meets Captain Muluco Wraith, and many others. While his poor sister is picked up by a altogether more mysterious ship. That of the Vampirates. Here she falls for the dashing Lorcan Furrey. An Irish vamp frozen at 17-years-old. Oh yes, before your Edward Cullens there were Lorcan Furrey's!
I don't want to give too much away, and that's about all I can say without going into major detail on the next three books, 2006's Tide of Terror, my personal favourite Blood Captain released in 2007, and last years offering, Black Heart. For me, the books just get better and better. More and more epic every time.
Black Heart introduced us to the most chilling female character I have come across. Lady Lola Lockwood. She bottles blood for crying out loud! She baths in it. The woman is pure terror. But so amazing. There's just something about her that makes you like her, for me anyway. She's the sort of person that you love to hate. But you can't help forming an attachment to her.
The series even under-went a make over in-between Blood Captain and Black Heart, to give us the glorious covers that we have now!
There are twists and turns a-plenty in these books. You definitely will not be disappointed. I cannot recommend them enough, for boys and girls. And what with the fifth book, Empire of Night, published in just over a weeks times, things look set to get even darker. Expect a review! It's one of my most anticipated books this year!
Posted by Ryan at 14:51