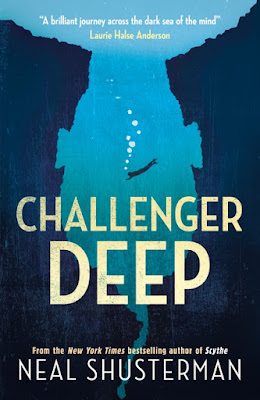 Written by: Neal Shusterman.
Published by: Walker.
Released: 6th August 2020.
Format: Hardback.
Rating: 4/5.
Official synopsis: "Caden Bosch is on a ship that's headed for the deepest point on Earth: Challenger Deep, the southern part of the Marianas Trench. Caden Bosch is a brilliant high school student whose friends are starting to notice his odd behaviour. Caden Bosch is designated the ship's artist in residence to document the journey with images. Caden Bosch pretends to join the school track team but spends his days walking for miles, absorbed by the thoughts in his head. Caden Bosch is split between his allegiance to the captain and the allure of mutiny. Caden Bosch is torn."
-
I haven't read many of Shusterman's books in all honestly. I have read Scythe, the first book in the Arc of the Scythe trilogy and I absolutely adored it and have been meaning to get around to the rest of the trilogy, I just haven't had the chance yet. But then I saw this pop up on Netgalley and the premise really drew me in and I just knew I had to read it.
I can't lie, when I first started it I was a little thrown. Mostly the book is made up of very, very short chapters that flit about from one place to another very quickly. One moment, Caden is at school, trying hard but failing to keep up with his friends conversations. The next he is aboard a ship and trying to keep up with the captains demands. I found the complete flips sometimes quite hard to wrap my head around, but once I got used to it it was okay. Once I got into it the book itself was such an intense and all consuming read that you just cannot put down. The fact that the chapters are so short only adds to this as the old "ooh, just one more chapter before bed" leaves you a little unsatisfied as they're so short it actually turned into another ten or fifteen chapters before bed... Following Caden as he struggles with his mental health is a real journey and one that I really enjoyed being along for the ride. It's a weird book because some of it makes little to no sense at all... the chapters on the pirate ship for example... Sometimes I read a few of them a couple of times thinking I'd read it so quick I had missed it, but they literally make no sense at all and I think this is intentional, as sometimes these thoughts that invade our minds make no sense either.
It is an incredibly thought provoking read, dealing with a rage of hard hitting topics, suicide included and there are some really hard hitting moments that actually made me have to put the book down for a few moments just to compose myself to carry on. I don't profess to be a mental health expert, but there were certain aspects of this book that really hit home with me from when I was younger and some of the thoughts I had after my mum passed away. This book felt like the most realistic depiction of mental health that I have read for a while and for that I must commend Mr. Shushterman.
It was also a very poetic read, just the way it was written, the structure of some of the chapters. Once you really got into it it was very easy to get carried away.
I also saw when googling the book that Disney are making it into a film for their Disney+ service so think it will be interesting to see how they interpret and make it for a wider audience.
Overall I really enjoyed this and would highly recommend it to others! It is out right now so do go and check it out!
My thanks to Walker/Netgalley for my review copy!
Posted by Ryan at 08:00