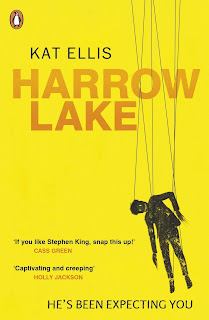 Written by: Kat Ellis.
Published by: Penguin.
Format: Paperback.
Released: 9th July 2020.
Rating: 4/5.
Official synopsis: "Welcome to Harrow Lake. Someone's expecting you . . . Lola Nox is the daughter of a celebrated horror filmmaker - she thinks nothing can scare her. But when her father is brutally attacked in their New York apartment, she's swiftly packed off to live with a grandmother she's never met in Harrow Lake, the eerie town where her father's most iconic horror movie was shot. The locals are weirdly obsessed with the film that put their town on the map - and there are strange disappearances, which the police seem determined to explain away. And there's someone - or something - stalking her every move. The more Lola discovers about the town, the more terrifying it becomes. Because Lola's got secrets of her own. And if she can't find a way out of Harrow Lake, they might just be the death of her..."
-
I will preface this review by saying I do not like scary things as a general rule. Normally books are okay as you can use your imagination to dampen it down a bit, but scary movies, no thank you... No. Thank. You. And you only have to look at the (albeit stunning) creepy cover for Harrow Lake to know that things aren't going to be all sunshine and kittens...
Lola is sent to live with her grandmother when her father (who is a successful film director...) is attacked in their own home. She has never met her grandmother, knows very little about her mother and has a strange relationship with her father who she only ever refers to by his first name. When she arrives, her bag has gone missing and so she must wear her mums old clothes something that seems to both please and annoy her grandmother. As Lola begins to explore the little town which was the setting for one of her fathers most successful films, which coincidentally starred her mother, strange things begin to happen. People look at her strange, they whisper and she begins to see that she isn't welcome. And then she learns about the urban legend of Mister Jitters and how her mother may somehow be involved...
Honestly, Harrow Lake surprised me. I went into it with an open mind, almost expecting to have to shut it and say I couldn't go any further, but I kept going and I am so glad that I did because I thoroughly enjoyed it from the very first page. It's engaging, wonderfully written and has a thriller feel to it, keeping you glued to the page wondering what on earth is going to happen next. There were a few moments that made me jump, moments that made me smile and laugh, moments that made me feel for the characters and the situation they have found themselves in. Harrow Lake has it all. I loved all the little twists and turns.
I loved the feel of it all. The setting that seemed to be stuck in time, never evolving from the moment the cameras finished rolling whilst the film was being made. Everyone dresses old fashioned. It's classic old-school horror aesthetic. Small town. Seemingly cut off from the outside world. Secrets around every corner.
I would highly recommend you read this, even if you aren't a horror fan. It was chilling and fun at the same time and it'll have you jumping at something moving in the corner of your eye for a while after reading it too!
My thanks to Simon at Penguin for my review copy in exchange for an honest review!
Posted by Ryan at 08:00