With just a few weeks to go until the release of the mammoth eighth Harry Potter film, Harry Potter and the Deathly Hallows Part 2, UK publisher of the series, Bloomsbury, are hosting a search to name the favourite character of the series, once and for all. I've voted and now it's your turn! Want to see your favourite character named the ultimate? Well all you have to do is click the image below and you'll be taken to cast your vote!! You have until 26th August to make your voice heard!! 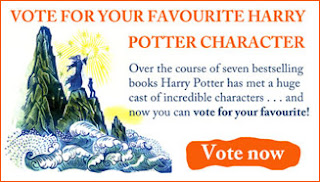