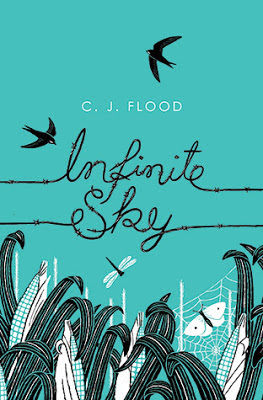 Official synopsis: "Iris Dancy’s free-spirited mum has left for Tunisia, her dad’s rarely sober and her brother’s determined to fight anyone with a pair of fists. When a family of travellers move into the overgrown paddock overnight, her dad looks set to finally lose it. Gypsies are parasites he says, but Iris is intrigued. As her dad plans to evict the travelling family, Iris makes friends with their teenage son. Trick Deran is a bare knuckle boxer who says he’s done with fighting, but is he telling the truth? When tools go missing from the shed, the travellers are the first suspects. Iris’s brother, Sam, warns her to stay away from Trick; he’s dangerous, but Iris can no longer blindly follow her brother’s advice. He’s got secrets of his own, and she’s not sure he can be trusted himself.  Infinite Sky is a family story about betrayal and loyalty, and love."

Sometimes when you read a book you just have to write your review down as soon as possible, because there are so many feelings and so many thoughts running through you that you don't want to miss a thing.

Infinite Sky is one of those books.

Where do I even begin? First off, lets take a look at the cover. I mean WOW! Right? Beautiful. And the jpeg doesn't even do it justice. In your hands it's even more beautiful - a stunning little casebound (no dust jaket) hardback. A true wonder to look at, and what is inside is even more beautiful. C. J's writing is fluid, beautiful and lyrical. It's like melted butter it's that smooth. I was just cast adrift on her prose and floated through the story as if I were watching from a cloud above. It honestly is written so well and so lovingly.

The setting is beautiful - the way the cornfields, the paddock, the brook are all described evoke such strong imagery and you can tell that it's been well thought out.

Infinite Sky deals with a few different themes, or ideas. Travellers, gypsies, move into the paddock behind the house that Iris has lived in all her life. She doesn't seem to see much problem in it. She finds the travellers enchanting, in particular the mother and a boy who she believes to be around her brothers age. Trick, he calls himself. Soon they strike up a friendship but all is not well. There is building tension. Iris's father is furious that these travellers are living on his land illegally and is prepared to do whatever it takes to get them gone - soon Iris finds herself not being completely honest with her own father and finds her feelings about Trick becoming more and more confusing.

It deals with prejudice, honestly, integrity and love. First love. Forbidden love. But what I like here is that it's somewhat relate-able  It's not of the vampire/werewolf/fairy/supernatural in love with a human kind of love story. It's a story of modern day forbidden love - forbidden between two completely different cultures - this I believe gives this book such a depth that many books in it's style can only dream of.

It also deals with the situations that can arise when parents separate - who keeps the children, or in some cases who even wants them, who has to pick up the pieces, who takes responsibility.

And soon, things take a turn for the worse. Iris's brother is getting deeper and deeper in with the wrong crowd, and soon consequences for all follow - not just Iris's brother, but for herself, her warring parents and Trick too.

Towards the end of the book, it is such an emotional roller coaster that I can't even begin to explain it. So many feels! So, so many! I can't say much more without spoiling it. It's so hard. Just whatever you do get it, read it, feel all the feels and love it. C. J. Flood, you are amazing - you made me have a few tears as I have already confessed on Twitter, and you have created something so beautiful, so wonderful, you should be so proud!
Posted by Ryan at 18:17