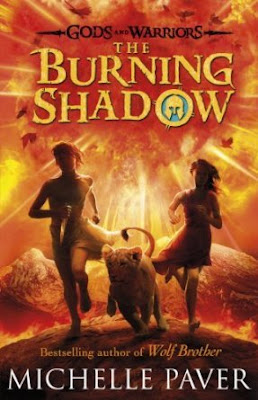 Official synopsis: "'If an Outsider wields the blade, the House of Koronos burns...' A boy on the run. A deadly prophecy. A race against time. Hylas the Outsider is captured by slavers. Set to work in the terrible underground mines of Thalakrea, he learns to his horror that he's now closer than ever to his murderous enemies, the Crows. He has to escape before they find out he's here. Pirra, the daughter of the High Priestess, is also on the run. When Fate reunites her with Hylas, their survival depends on ancient magic and an orphaned lion cub - unless the Gods have other plans..."

Ah. What a wonderful day. The arrival of a new Michelle Paver book is always a special event for me. That special day that comes but once a year and it brings with it a sense of wonder, amazement, excitement and a sliver of fear at what might happen next to the characters you're coming to love.

I thoroughly enjoyed Gods and Warriors which was released last year, kick-starting this series of the same name, and I remember saying in my review (which can be found here) that it felt very much a world building book that was setting things out nicely for the series to build upon these foundations and grow, and flourish. And after reading The Burning Shadow, I stand by that comment. We find Hylas trapped - he's a slave, set to work in the copper mines on the side of a mountain in Thalakrea, and he isn't a lone. Hundreds, if not more, are working tirelessly for little or no reward just to appease Kreon, the man who owns them. And to make thing's worse, he's a Crow.

The stakes have risen in The Burning Shadow. Now that some of the Crows know who Hylas is, he risks being caught at every turn. But he's adamant not to get drawn in to the prophecy laid out by the Oracle. He's determined that he'll have no part to play in the bringing down of the House of Koronos. All he wants is to find his sister, Issi, and make sure that she's okay. But the gods themselves have different ideas...

Pirra is also making moves to do what she wants. Her mother, Yassassara, the High Preistess is planning to send her away for good and Pirra is having none of it. She plots a daring escape and when she meets a wise woman called Hekabi she see's a way out. But Hekabi is not what she seems and Pirra is drawn away from Keftiu again into danger, back into the eyesight of the crows, and Hylas.

I don't even know where to begin with my love of this book. I've read Gods and Warriors several times, or The Outsiders as it now known after the paperback re-print..., and I really have come to love Hylas and Pirra. The characters are building, their progression plain to see, none more so than Telamon who... I can't even begin to explain the changes that boy is going through, you need to read it!

So many characters are introduced in this book that it can be a little overwhelming at times. Hekabi. Periphas. Pharax. Alekto. Kreon. So so many, but they're all so well balanced. Some scary. Some not. Some you instantly warm to and some you cannot stand right from the start. But this is needed. It provides a great balance of good and bad. And it's also good to see the return of a character we meet in Book 1, one who I'll be honest I didn't think about until he popped up again - his reappearance however is a good thing because he's an interesting character that I'm looking forward to seeing again and again through the series...

And Havoc! The lion cub. She's rivalling Wolf in Michelle's Chronicles of Ancient Darkness for my favourite fictional animal ever. She's just so beautifully imagined and the way Michelle seems to have gotten in to her head, the way she does for every animal she writes. It's amazing and it adds to the whole magical feel to the story, this kind of mystical edge that makes you tingle. Just so good!

The book, as you'd expect being a Michelle Paver affair, is so well thought out, planned, and so beautifully written that you can't help but become addicted and fly through its 271 pages at breakneck speed. I am loving this world, I'm loving this series and I seriously cannot wait to see what Michelle has in store for us next. The Burning Shadow does an amazing job of taking the foundations laid in Book 1 and building upon them with such grace and thought. I remember seeing a video on her website and on the Puffin Live event she did earlier this year, or maybe it was end of last, I can't remember, where she said Book 3 features a falcon... and we go to Egypt! I cannot wait!

And as with the feeling you get with Christmas, that's it for another year. All that build up and it's gone, so quickly, in the blink of an eye...