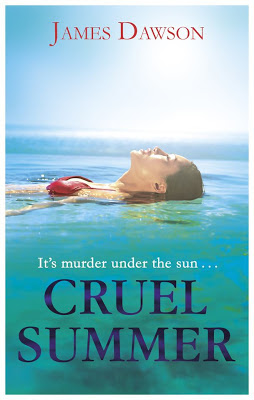 Official synopsis: "Ryan is looking forward to spending the summer with his old school friends at Katie's luxurious Spanish villa. He hasn't seen the gang since their friend, Janey, committed suicide a year ago. He hopes this summer they'll be able to put the past behind them and move on - until someone else arrives, claiming to have proof that Janey's suicide was murder! Ryan was hoping for sun, sea and sand. Suddenly, he's facing a long, hot summer of death, drama and deceit . . ."

Summer. Just the word itself brings to images to the front of your mind of sun, sea, sand. Alcohol. Parties. Friends. It's perfect, right? What more could you want? Well for Ryan, Katie and friends, they're going to get more than they bargained for this Summer holiday. They're about to star in their own Murder Mystery.

James Dawson exploded onto the YA scene last year with Hollow Pike and Cruel Summer only further solidifies his place there. It's snappy, incredibly well written and it keeps you on the edge of your seat pretty much from the off. Ryan likes to make believe he's staring in his own tv show, where he and his friend are the cast, at the mercy of the producers off camera who decides what happens and when it happens. And when the last season ended, poor Janey was a casualty, throwing herself off the edge of a cliff.

But Ryan doesn't believe she jumped. It's so out of character for her. It doesn't make sense. He believes she was pushed.

It's been a year since the whole gang have been together, after leaving school they all took their own paths, going out into the world to seek the careers they want, and so the chance to spend a few weeks in Katie's fathers villa in Spain is too good to pass up. They can have a good old catch up, spend a few weeks catching a tan, chilling out, spending time together again before separating again to continue with their lives.

But when do things ever go to plan in a tv show? Never! And when one of the gang dies unexpectedly, questions begin to be asked and it becomes clear that one of the gang is a murderer...

This book is so well written, so addictive and engrossing that you don't want to put it down until you've finished. There are so many twists and turns, more than you can shake a cocktail at, and the ending will leave you feeling so heartbroken, honestly I had tears in my eyes! It's brilliant. I've told James this, and I don't want to gush too much. But this book is perfect and everyone needs to read it for themselves!

Thanks James for another amazing read! Please don't stop!
Posted by Ryan at 15:46