Long term visitors to the blog may have heard me rave before about a series that was published between 2005 and 2011, comprising of six main novels and novella released for World Book Day in 2007. I was always a huge fan of the series, written by Justin Somper. I even ran a fan site and fan forums back in the day! So I've been there from the start, from when the covers looked like this... 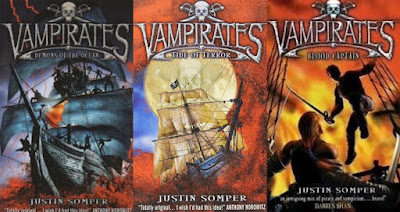 Before they got their first re-design just in time for the fourth book, Black Heart to be published in 2009!

I even have a few of the US editions, which are absolutely STUNNING!!!

Now, in 2020, the books are being re-released with a new publisher and a new look, ready to set sail on another voyage to find a new audience! The covers for Demons of the Ocean, Tide of Terror and (my personal favourite of the series...) Blood Captain, have been unveiled and they'll be available to buy from 5th March. 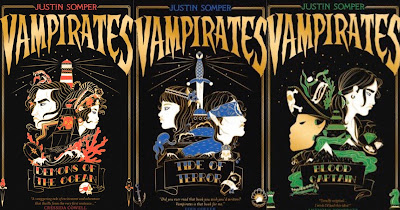 I really like them. I love the tattoo style of them. The colours. Ugh. I really like them. In all honesty my absolute fave has always been the original style just because it was so cool and colourful and I adore the original UK logo for the series! Plus I think there is something special about that first cover you read a series with. It always leaves an imprint on you. However, these new UK ones are brilliant and are a massive improvement on the original re-release over here in the UK. I just can't wait to see new readers find the series back in print and with covers like these they're going to stand out from the crowd! Can't wait to see the rest of the series! Justin has also revealed that each book will have new material as well, so I'm looking forward to seeing what that will be.