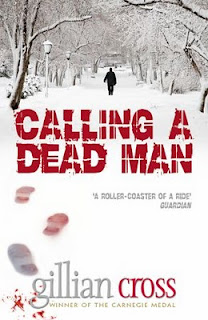 Written by: Gillian Cross.
Published by: Oxford UP.
Format: Paperback.
Released: New Edition - 6th May 2010 (Orignially published September 2001).
Rating: 4.5/5.
Official synopsis: "John Cox is dead, killed in an explosion while at work. His younger sister Hayley can't believe he's gone. Determined to see the place of his death, she flies to Moscow with John's fiancée, Annie-but the site they're shown isn't where John died. Suddenly it seems that there's more to his death than a tragic accident. Using a tracking system to locate John's mobile phone, Hayley and Annie find the real site of the explosion . . . but they are completely at the mercy of John's former Russian boss and his English speaking son, who have taken them there. Upon recovering the phone, it's clear that John is still alive. Meanwhile, in the Siberian forest, John is being nursed back from the brink of death by a village woman. As he slowly recovers he begins to piece together the truth: he's at the heart of a dangerous power struggle between two brothers who are desperate to silence him-for good."
When I picked up this book and began to read it, I regretted it big time. But not because it was bad. Because it was so good, so thrilling, that I actually could not put it down! I carried it with me around the house like a mad man. Mum asked me to do something, the book went with me. I had to feed the cats, the book went with me. I read this in one sitting, although a lot of walking was involved as well, and thoroughly enjoyed it. I even read late in to the night, a habit I had once broken.
Hayley and Annie are distraught when they find out that John, their brother and fiancée respectively, has been killed in Russia. But the more they delve into trying to find out what happened, the further they delve into danger and corruption.
Gillian Cross, best known for her Demon Headmaster series, adapted into a BBC series that I myself loved as a kid, has produced an absolute corker with Calling A Dead Man. The writing is top notch. The plot is intricate and it wasn't until near the very end that everything slots together. More tension and suspense than you can shake a stick at. Simply brilliant.
I can see why it was awarded the Carnegie Medal!
And the cover art is amazing. Definitely stands out! Thank you to the amazing Michelle Harrison over at OUP for sending me the copy! :D
Buy from Amazon UK
Posted by Ryan at 14:33