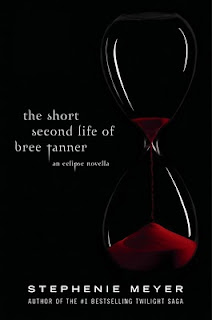 Written by: Stephenie Meyer.
Published by: Atom.
Fortmat: Hardback.
Released: 5th June 2010.
Rating: 4.5/5.
SPOILER WARNING FOR ECLIPSE AND BREAKING DAWN!
After a lot of waiting since the announcement that this would be released, I was so excited to finally get my hands on a copy. I adored Eclipse, and so another chance to enter that story again, but from a completely different perspective was an exciting prospect.

And I have to say that Stephenie Meyer really does not disappoint! Bree’s story is engaging and entrancing from the very beginning. As Meyer herself confesses in the introduction, the series is written in first person from Bella’s perspective, and so this causes some blindness to the story as a whole. She can only see what is apparent to her and so doesn’t really get to see things going on behind the scenes that build up to the conclusion. She can only see what is going on around her, and The Short Second Life of Bree Tanner provides just the insight that I think a lot of Twilight fans have been waiting for. We finally get to see what life is like as a newborn vampire.

And not just from memory. I can’t quite remember, but there must have been mentions in the saga of life beginning as a vampire, and Bella’s beginning is very controlled by the Cullens. This is fresh, new and completely out of control.

I personally loved this book. It was fun and really does give a good insight to the world of Eclipse.

However, I do have a few downsides. It’s all one long text. No breaks at all, and this annoyed me when it came to having to put the book down. There was no definite point at which you could take a break. And also I felt that some bits were a bit rushed towards the climax of the book. I felt that the fighting was completely missed out on. In Eclipse we got to see a lot of the fighting where Bella was, but not with the rest of the Cullens, and for me, that part was over far too quick.

Overall though, it was a brilliant book that I thoroughly enjoyed and would recommend for Twilight fans. It made me really like Bree and wish that she didn't die.