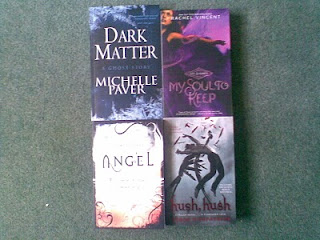 In My Mailbox idea from Kristi @ The Story Siren, and all links take you to The Book Depositary
I think this has to have been one of the best weeks for me for a while. I got 3 books that I have been dying to read for a while, and one that, although not my normal style, I'm looking forward to reading. In order of dropping through my postbox we have...
For Review: 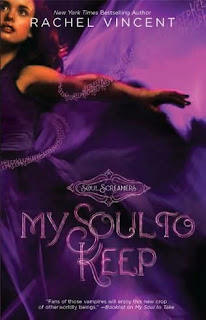 My Soul To Keep by Rachel Vincent.
"Kaylee has one addiction: her very hot, very popular boyfriend, Nash. A banshee like Kaylee, Nash understands her like no one else. Nothing can come between them.

Demon breath. No, not the toothpaste-challenged kind. The Netherworld kind. The kind that really can kill you. Somehow the super-addictive substance has made its way to the human world. But how? Kaylee and Nash have to cut off the source and protect their friends—one of whom is already hooked.

And so is someone else…"

Not my normal style, I'll admit, but I am openminded about what I read. And it's signed by Rachel! :D Thank you Rachel for the copy! 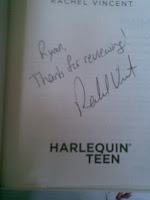 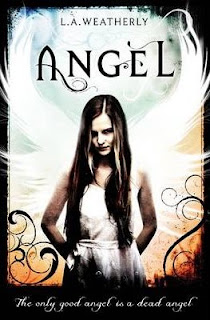 Angel by L. A. Weatherly.
Advance Readers Copy/UK proof.
"In a world where angels are beyond redemption, Alex thinks he's found one that might deserve mercy. Alex is a ruthless assassin - of angels. Forget everything you've heard about them before. Angels are not benign celestial creatures, but fierce stalkers whose irresistible force allows them to feed off humans, draining them of their vitality until there is barely anything left. As far as Alex is concerned, the only good angel is a dead angel...until he meets Willow. She may look like a normal teenager but Willow is no ordinary girl. Half-angel, half-human, Willow may hold the key to defeating the evil angels. But as the hunter and the hunted embark on an epic and dangerous journey and Willow learns the dark and terrifying secrets of her past, Alex finds himself drawn to Willow...with devastating consequences. Eoin Colfer reinvented the fairy, Stephanie Meyer reinvented the vampire, L.A. Weatherly reinvents the angel! This is a heart-pounding, knuckle-whitening, paranormal romance action-adventure for fans of the "Twilight" series. This is the first in a devastating new trilogy."
Now I am very excited to read this. The cover on the poof is brilliant. I'm about half-way through this now and loving it so far. Thank you to Anna at Usborne for this! 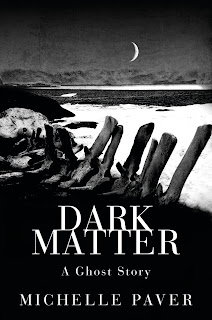 Dark Matter by Michelle Paver.
Advanced Readers Copy/UK Proof
"'What is it? What does it want? Why is it angry with me?' January 1937 Clouds of war are gathering over a fogbound London. Twenty-eight year old Jack is poor, lonely and desperate to change his life. So when he's offered the chance to be the wireless operator on an Arctic expedition, he jumps at it. Spirits are high as the ship leaves Norway: five men and eight huskies, crossing the Barents Sea by the light of the midnight sun. At last they reach the remote, uninhabited bay where they will camp for the next year. Gruhuken. But the Arctic summer is brief. As night returns to claim the land, Jack feels a creeping unease. One by one, his companions are forced to leave. He faces a stark choice. Stay or go. Soon he will see the last of the sun, as the polar night engulfs the camp in months of darkness. Soon he will reach the point of no return - when the sea will freeze, making escape impossible. And Gruhuken is not uninhabited. Jack is not alone. Something walks there in the dark."
When this came through my postbox on Thursday, I pretty much freaked out. Was so excited! As a result, I had to begin reading it straight away and finished it the next morning. Absolutely loved it. Best book I have read this year. I'm not publishing my review on here till October, as it'll be used for a special themed month I am planning. However, my review has been sent to Orion via e-mail, and I will probably post it on GoodReads.
Won: 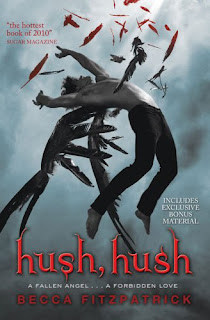 Hush, Hush by Becca Fitzpatrick.
"Nora's never been particularly attracted to the boys at her school. Not until Patch came along. With his easy smile and eyes that seem to see inside her, she is drawn to him against her better judgement. But after a series of terrifying encounters, Nora's not sure who to trust. Patch seems to be everywhere she is and knows more about her than her closest friends.And when she tries to seek some answers, she finds herself near a truth that is way more unsettling than anything Patch makes her feel. For Nora is right in the middle of a centuries-old battle between the immortal and those that have fallen - and sooner or later, she's going to have to pick sides..."
I've wanted to read this for a while, but never got round to it. And now I have won a paperback copy thanks to Jenny on Wondrous Reads! :D And Simon & Schuster UK for sending out the copy! Can't wait to read it!
A good week for me. Hope everyone else has an amazing week this coming week, despite the epic fail at the World Cup! Happy reading!
Posted by Ryan at 17:00