Cover of the Week: In Darkness by Nick Lake 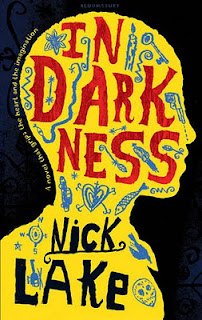 Written by Nick Lake, an editor at HarperCollins Children UK (this bloke is responsible for publishing so many books that I love, so he's reached Godly status already...), In Darkness is set around the aftermath of the Haitian earthquake which we all were horrified by last year. I have the book currently sitting on my "To Read" pile, and the cover actually in the flesh is stunning. Bloomsbury have done an amazing job! So eye catching and I love the colours used. I don't think the jpeg does it much justice!

Really cannot wait to read it. Check out the official synopsis below...

"In darkness, I count my blessings like Manman taught me.
One: I am alive.Two: there is no two.In the aftermath of the Haitian earthquake, a boy is trapped beneath the rubble of a ruined hospital, thirsty, terrified and alone. Shorty is a child of the slums, a teenage boy who has seen enough violence to last a lifetime, and who has been inexorably drawn into the world of the gangsters who rule Site Solèy; men who dole out money with one hand and death with the other.
But Shorty has a secret: a flame of revenge that blazes inside him and a burning wish to find the twin sister he lost seven years ago. And he is marked. Marked in a way that links him to Toussaint l’Ouverture, the Haitian rebel who led the slave revolt and faced down Napoleon to force the French out of Haiti two hundred years ago.


As he grows weaker, Shorty relives the journey that took him to the hospital, with a bullet wound in his arm. In his visions and memories he hopes to find the strength to survive – perhaps then Shorty and Toussaint can find a way to be free . . ."

It's out in hardback on 5th January and sounds like a corker!
Posted by Ryan at 09:00