Discworld creator, and general genius Terry Pratchett is releasing two books this year, neither Discworld releated but that doesn't seem to be a bad this. Later in the year we're getting Happy Families, set in the Victorian era, but before that we get The Long Earth. It's due for publication on 21st June and is a collaboration piece between Terry and a gentleman called Stephen Baxter. It is an adult book (I think...) but it looks and sounds awesome and Terry is just so good that it'll be a crime to miss it, I believe.

The possibilities are endless (just be careful what you wish for...)1916: the Western Front, France. Private Percy Blakeney wakes up. He is lying on fresh spring grass. He can hear birdsong, and the wind in the leaves in the trees. Where has the mud, blood and blasted landcape of No man's Land gone?

2015: Madison, Wisconsin. Cop MonicaJansson has returned to the burned-out home of one Willis Linsay, a reclusive and some said mad, others dangerous, scientist. It was arson but, as is often the way, the firemen seem to have caused more damage than the fire itself. Stepping through the wreck of a house, there's no sign of any human remains but on the mantelpiece Monica finds a curious gadget - a box, containing some wiring, a three-way switch and a...potato. It is the prototype of an invention that Linsay called a 'stepper'. An invention he put up on the web for all the world to see, and use, an invention that would to change the way mankind viewed his world Earth for ever. And that's an understatement if ever there was one...

...because the stepper allowed the person using it to step sideways into another America, another Earth, and if you kept on stepping, you kept on entering even more Earths...this is the Long Earth. It's our our Earth but one of chain of parallel worlds, lying side by side each differing from its neighbour by really very little (or actually quite a lot). It's an infinite chain, offering 'steppers' an infinite landscape of infinite possibilities. And the further away you travel, the stranger - and sometimes more dangerous - the Earths get. The sun and moon always shine, the basic laws of physics are the same. However, the chance events which have shaped our particular Earth, such as the dinosaur-killer asteroid impact, might not have happened and things may well have turned out rather differently.

But, until Willis Linsay invented his stepper, only our Earth hosted mankind...or so we thought. Because it turns out there are some people who are natural 'steppers', who don't need his invention and now the great migration has begun...

Ooh. Sounds good. And it looks a little like this: 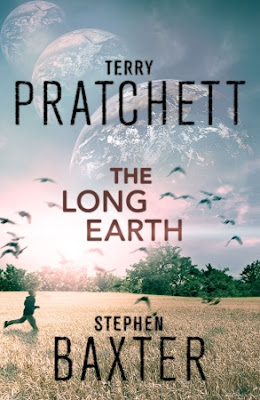