The Fault In Our Stars by John Green [Review] 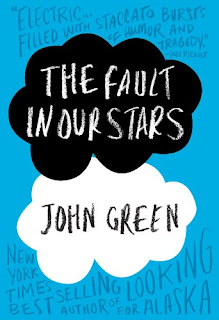 Official synopsis: "Diagnosed with Stage IV thyroid cancer at 12, Hazel was prepared to die until, at 14, a medical miracle shrunk the tumours in her lungs... for now. Two years post-miracle, sixteen-year-old Hazel is post-everything else, too post-high school, post-friends and post-normalcy. And even though she could live for a long time (whatever that means) Hazel lives tethered to an oxygen tank, the tumours tenuously kept at bay with a constant chemical assault. Enter Augustus Waters. A match made at cancer kid support group, Augustus is gorgeous, in remission, and shockingly, to her interested in Hazel. Being with Augustus is both an unexpected destination and a long-needed journey, pushing Hazel to re-examine how sickness and health, life and death, will define her and the legacy that everyone leaves behind."

The Fault In Our Stars is the first book by John Green that I have ever read. I've heard fellow bloggers rave and rave and rave about him, but I've just, for one reason or another, picked up one of his books. When it was announced that this book was coming out in 2012, and I heard the premise, I knew that maybe, just maybe, this was the book to kick-start my John Green reading experience. And the fact that he was signing 150,000 copies of the book also made me want a copy even more! Even so, when I got my copy earlier this week, courtesy of the amazing Book Depository, I was a bit apprehensive. This book is all about cancer, there's no denying it. I've lost several family members through cancer, and even had a cancer scare myself when I was 16. If Green was really as good a writer as people said he was, how was I going to react?

Also, I didn't want the book to be a let down... Anyway, I started reading. And instantly I was caught up in Green's writing. It's so fluid, almost lyrical and I couldn't take my eyes away from the page. As already mentioned, yes, it's a book about cancer. But it's so much more than that. It's about the pity you receive when you have cancer and so so many other things beside. It almost has a cynical view of the disease, and how people feel towards those that pity them.

Despite it's dark themes and premise, this book has so many laugh out loud moments that at points, you almost forgot that the main character, a strong willed sixteen year old called Hazel, is here dying. Yes, she's a miracle in the sense that she's still alive, but she cannot get around the fact that she will die - and sooner rather than later. As she finds out through her friends at Support Group who also are dying...

What I really like about the book though is that I never once truly pitied the characters. I felt for them, cared about them, and were sad for them, but I didn't pity them. It showed that not everyone who is ill wants people to fuss around them, to worry and to hover.

I have to say, I'm finding it hard to sum up how I feel about this book, and no doubt this review is a little messy, but I'll be honest with you. I loved it. Every second. Every word. Every page. John Green has crafted something so beautiful, so read, so brutally honest and yet so funny that I fail to see how people can dislike this book in any way shape or form. It spoke to me (although, when you read the book you'll see that not all books speak to people as the authors wish them to - don't worry, I'm not being weird here... it's part of the book...), after reading it, and I'll admit a few tears, I sat back and really evaluated the life I have. It's that sort of book. Infuriatingly thought provoking, but in a good way.


It was a really haunting read and it made me think, do people going through cancer really feel this way? How would I of been if my scare hadn't been just a scare? Would I be the same in Hazel's situation? and I have to say that at times reading it, I had a little knot in my stomach. Haunting... But beautifully and masterfully written. I know I throw this word around a lot, but it was so addictive. Like I just could not let go.


Only one minor criticism that I have, and it is very minor, and I just remembered it because I used the word in the last sentence... Like is said. A LOT! And I mean a lot. Not just by one character, but several. And I have to admit, it started to nag me, but otherwise... amazing. I don't really like it when characters call another by their full, or first and middle, names. It just niggles me, and it is used in this book a lot, but I choose to overlook it as the book is just too damn good!

I cannot thank John Green enough for being such a genius. I cannot wait to get stuck into his back catalogue of work, and look forward to whatever he publishes next. You just have to read this one. Just do it.

Labels: 2012, John Green, Reviews, The Fault In Our Stars