The Other Life by Susanne Winnacker [Review] 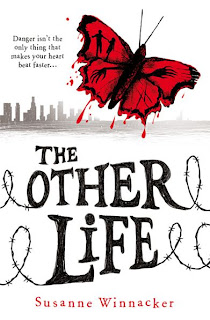 Official synopsis: "The Other Life: who we were before the virus. How we'll never be again. It's been 3 years, 1 month, 1 week and 6 days since Sherry has seen daylight. When things went wrong up above, she was sealed off from the world in a bunker with her family. But when they run out of food, Sherry and her dad must venture outside. There they find devastation, desolation...and the Weepers: savage mutant killers. When her dad is snatched, Sherry joins forces with gorgeous but troubled Joshua - an Avenger, determined to destroy the Weepers. But can Sherry keep her family and Joshua safe, when his desire for vengeance threatens them all? The seeds of first love are sown amongst the death and destruction of a nightmare future in this incredible debut novel. Beautifully formed and gut-wrenchingly gripping, it's essential reading."

The Other Life is the first book to come from Susanne Winnacker, and another book added to Usborne's growing YA list. I received this proof sometime last Summer and as soon as I read the synopsis on the back, I thought ooh... this sounds good. I read the first chapter and loved it, but felt that it was too early to be reading it with it not actually due for publication until next month... So I decided to put it away for a rainy day once 2012 had gotten here...

Fast forward to last week and I found myself mulling over a few titles, The Other Life being one of them. I looked at the cover and for the first time noticed that the butterfly isn't a simple butterfly. There's 2 characters, who I not know to be Sherry and Joshua..., and some creepy looking clawed hands. Those of the Weepers. This realisation made me go ooh... I picked it up and re-read the first chapter and once that happened, the rest is history.

I've already tweeted Susanne, so she knows how I feel about the book. It was an explosion of "GOOD LORD THIS IS AMAZING..." and so on... But I should explain further.

The Other Life is set in the not too distant future in LA. We know it to be the sun-kissed home of celebrities and Hollywood, but Sherry knows it as home. But the LA we see in this book is completely different to the LA we all know about today. Sherry and her family have been locked away in a bunker, hiding from a disease which has ravished parts of America. Rabies. People are dying, and a state of emergency is called. The government asks its people to remain calm and tells them that they will be notified when it is safe to emerge... But three years later, nothing is happening and the broadcasts have stopped. Soon, Sherry and her family run out of food and desperation sinks in. Surely after three years it'll be safe?

Now there is something new to contend with. Weepers. Mutilated humans who have been turned by rabies into flesh craving, blood hungry monsters. Their favourite dish? Humans. Now, I know what you're thinking... Ugh... Another zombies-turned-into-zombies-by-disease/famine/war/whatever-else-makes-zombies book? and when I first read about them I thought the same, but these are different. Yes, they have a zombie element about them, but they are original. They're called Weepers because a milky substance falls from their eyes, giving them the appearance of crying; their flesh falls away - this made me think of lepracy and just general decay. It's almost like they're no longer human or living, to me, I felt like they were rotting humans and nothing more... Apart from the fact they don't go around blurting out "Brains... brains...". They actually have some sense of intelligence and their eyes look intelligent too. I can't really explain it very well, I'll leave that to Susanne, but still. Wow!

The book is brilliantly written and I don't really want to say much more about what happens because it really would spoil it. There are plenty of twists and turns to keep you going, the writing as I've already said is freaking amazing. Susanne has created something beautiful here that really stands out the current flood of dystopian fiction.

I really cannot wait for the sequel, The Life Beyond due out in 2013!! So far away!

Pre-order from Amazon UK
Posted by Ryan at 09:00