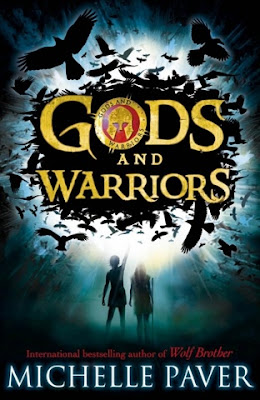 Written by: Michelle Paver.
Published by: Puffin.
Format: Hardback.
Released: 28th August 2012.
Rating: 5.5 (is there any other rating worthy?)

Official synopsis: "From a time of myths and ancient magic will come the legend of the lost city of Atlantis, tales of gods and warriors - and the rise of a hero. His sister is missing. His dog has been killed. High in the Greek mountains, Hylas is running for his life. The mysterious black warriors want Hylas dead. So begins his quest across land and sea with only a girl and a dolphin by his side. But the warriors are relentless. Why are they hunting Hylas - and how will he survive?

As a long term fan of Michelle, this book was always going to be a big deal for me, and the wait for it has been a torturous one. First announced back in December 2010 after the release of the terrifying ghost story, Dark Matter, the last year and a half have been slow. Long days of waiting for something new to read, something new to put on the bookshelf next to her previous books. I’d even left a space just begging to be filled. And now, at last, it’s here.

And it was worth every single second that passed. Every moment was worth the wait because what we have here is nothing short of amazing.

I remember saying on Twitter in February when I actually read the book that it’s a real world building book and I still stand by that. Gods and Warriors really gives us an insight into the world in which the 5 book series is set. Set in the Mediterranean around the bronze age, we get a glimpse of the way the characters live in the bronze-age, we get a feel for their customs and their ways, their beliefs and their views on those who are not like others. Outsiders.

Hylas is an Outsider. All his life, he and his sister have lived outside of the village with a few others, tending to goats on a mountainside. They are not worthy of life within the confines of the village, but at the same time, they are given a purpose. But then one day, everything changes. The Black Warriors come to slaughter them all. But why? Hylas manages to escape, barely, with his life, but his sister is missing. His beloved sister Issi. She’s all he truly has in the world, she can’t be dead. Hylas is determined to find her. He has to.

But it’s not just the mission to find his sister that has been unlocked by the arrival of the Black Warriors. Something else is stirring, far bigger and far more dangerous.

I will be honest that when I started reading the book, it did take me a few chapters to warm to Hylas. To all of the characters really. I was so used to reading about Torak, and Renn and Wolf, that it felt weird to be reading about all these new characters. The style, although different to that of the Chronicles of Ancient Darkness, is instantly recognisable as Michelle’s, right from the first word, and it was hard to get used to these new characters being here, all of a sudden out of nowhere. And the book really does start all of a sudden. Bang. Right into the action from the first sentence. And the pace doesn’t really let up. As is custom with Michelle’s work, she’s so economical. Every single word counts. Every sentence has fought for it’s right to be there and this is evident. Sometimes when reading a book you get a sense that a paragraph or even sometimes whole chapters are just fillers, only there to be there, and not really serving any justice to the story. But with Gods and Warriors, and indeed all of Michelle’s work, there is no sense of that here.

We also meet Pirra. Daughter of the High Priestess she has never been her own person. Always told what to do, when to do it and told never to question, she longs to be normal, to live outside of the confines of the temple. She is feisty, strong willed, and defiant.

And as we know Michelle is so passionate about wildlife, we have animals here too. From the blurb we are told to expect dolphins, a lion cub and a falcon, and it is the dolphin we meet first. Michelle caught peoples imagination in Wolf Brother when she wrote from Wolf’s point of view, from within his mind and here again she does it with the dolphin, and it is mind-blowing. She really seems to get it. Whatever it is, she knows exactly how to express it, and how to get as much out of it as she can. I often wonder if there is an element of Doctor Dolittle in Michelle. She has captured something so wonderful and captivating.

Again, I’ll be honest, this is not at all what I was expecting. As already mentioned, the wait was a long one, and having already known that the series was to be called Gods and Warriors, I let my mind wander many-a-time to think about what the series could have been. I’d imagined Zeus and Hades. I’d imagined storms created by Gods and the Humans of Earth, the Warriors of Earth, rebelling against them. But that’s not what we find here. It’s something far greater and more original than I’d thought and to be honest, I’m thankful!

Michelle Paver is back with a colossal bang ladies and gentlemen. You can expect to be late for school, work, appointments, everything, because once you sit down with this book you will not want to get up until you’ve finished it!

It’s beautifully written, eerily captivating, totally addictive and blooming brilliant to boot! Please, I implore you, do not miss out on the start of what looks set to be an incredible series. I am gagging for Book Two already! ARGH!
(P.S. Check out that cover! I’m sorry, but I can’t help but stare! Bravo Puffin! Bravo!)
Posted by Ryan at 07:00