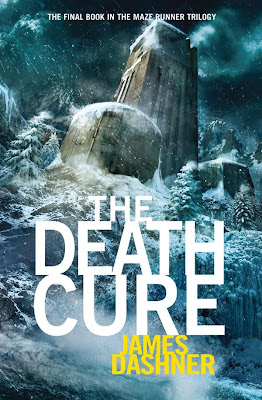 Official synopsis: "Thomas knows that Wicked can't be trusted, but they say the time for lies is over, that they've collected all they can from the Trials and now must rely on the Gladers, with full memories restored, to help them with their ultimate mission. It's up to the Gladers to complete the blueprint for the cure to the Flare with a final voluntary test.
What Wicked doesn't know is that something's happened that no Trial or Variable could have foreseen. Thomas has remembered far more than they think. And he knows that he can't believe a word of what Wicked says.
The time for lies is over. But the truth is more dangerous than Thomas could ever imagine.
Will anyone survive the Death Cure?"

I'll be honest, I'm writing this just half an hour after finishing the book, and whilst I freaking loved it, there is a big sense of disappointment for me. The book had me hooked the whole way, that's a given. It's action packed. Taught and the writing is fluid. But then the ending... Whilst good... Argh. I just can't explain it. It wasn't what I was expecting, and while I suppose it is a natural ending, it just happens. There's no explanation. No revelation. It just happens.

So many questions that I'd hoped would of been answered are left hanging. Maybe we'll just never know their answers...

But for the main part I loved this book. As I've already said, it is so action packed. I think the book benefits from the fact that the Trials are over. At points in the previous two books, The Maze Runner and The Scorch Trials, there were moments where it dragged slightly, thanks to the Trials being run by ever omnipresent WICKED.

And speaking of WICKED, they never fail to amaze me. Yet again, they seem to grow more twisted, more sinister. More sick. There were moments in The Death Cure that had me gasping for breath, and even made me feel repulsed. Janson, or Rat Man as the Gladers know him is the worst. A truly horrible character... The character development, again is lacking, but with this series, it's not really about the characters. It's more about the plot, and the destination.

Cranks are getting worse. The Flare is spreading far faster and wider than WICKED could of anticipated, and time is running out. They're nearing the end of their testing, and have nearly completed the blueprint that will end it all. They're nearing on a cure, or so they claim. But they need just one last thing, one piece of the puzzle to make it all complete. The Final Candidate. Thomas.

Some of the scenes, the images, the descriptions and actions in this book are so chilling. One, near the end made me squirm a little and actually made me pause for a bit.

One moment in the book though, actually made me chuckle. I'm not sure it's meant to, but I couldn't help myself. The image that I created in my head was just hilarious... Maybe if you read the book you'll know which bit I mean, but I actually had to put the book down and laugh.

Overall, an enjoyable end to the series. I was going to dive straight into the prequel, The Kill Order, which came out earlier this week, but I think I need a bit of time away from the world of the Maze, the Scorch, WICKED, Thomas and all of his friends. I would still recommend the trilogy to anyone and everyone.