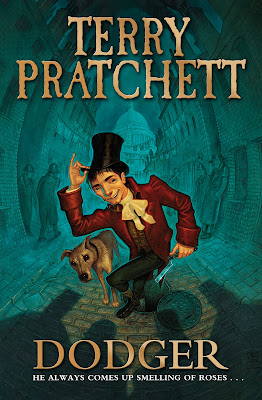 Official synopsis: "Dodger is a tosher – a sewer scavenger living in the squalor of Dickensian London. Everyone who is nobody knows Dodger. Anyone who is anybody doesn't. But when he rescues a young girl from a beating, suddenly everybody wants to know him. And Dodger’s tale of skulduggery, dark plans and even darker deeds begins . . ."

I'll admit to never really being much of a fan of Dickens. I've never really gotten it. Aside from The Muppet's Christmas Carol I've never really had much to do with it. But when I heard that Sir Terr Pratchett, genius that he is and creator of the best continuous series ever, Discworld, was due to tackle to tale of one of Dickens most famous characters, the Artful Dodger I suddenly got very excited. I couldn't wait to read what he'd do with the legendary character.

And the wait was definitely worth it. Dodger is a well thought out and well written book that made me laugh so much it's crazy. As is customary with any of Pratchett's work, be it The Colour of Magic or Nation, his hugely acclaimed YA novel which was the second of his books I ever read and adored, there's wit to be had on every page. Terry has this amazing abilit to play his cards very carefully. There are bits that younger readers can enjoy in one way, that older readers will understand on a different level. And there are also parts where it'll be a few pages later you'll actually get it and have a little chuckle.

I will be honest, I wasn't entirely sure what to expect here. Despite not being a fan of Dicken's work, we all know about the Artful Dodger. All of us. And I didn't want This to be just a re-hash of they story. I didn't want it to be anything like we've seen before and I wasn't disappointed at all. Dodger is fun, fresh and hugely enjoyable. At no point did I want to put it down regardless of what it was for. I just couldn't stop reatding. This isn't the Dodger as we know him - he's working for the good!

I love all the little twists in here. like Dickens himself being an actual character - I didn't expect it and at first i thought it wouldn't work. It it does, and it only made the book more enjoyable for me, making it look like Dickens had actually met this person and re-created him so well in his own work.

I'll be honest it's hard to summarise this book without spoiling it at all. It really hit me with a big surprise and I want people to feel that too. It really is an awesome book! My only real quip with the book is that there wasn't enough of it! It was so good I just didn't want it to end! Definitely one to check out whether you're a Pratchett fan or not!

Thanks to Edelwiess for my eARC courtesy of Harper Collins US!