So, yesterday I finally overcame my fears! After years and years of planning, thinking about it, worrying about pain, blood and needles, and finally biting the bullet, I got not 1, but 2 new tattoos! Yay! I have wanted both of them for an incredibly long time, and being the mega nerd I am, they are both book related, so I wanted to take the time to make this post just to explain the reasons behind them and the meanings too!

So first off, here they are! I freaking love them! They are still a bit red and swollen here as this was about 2 or 3 hours after they had just been done. There are still some ink smudges around that will be cleaned off, of course, but I LOVE THEM! 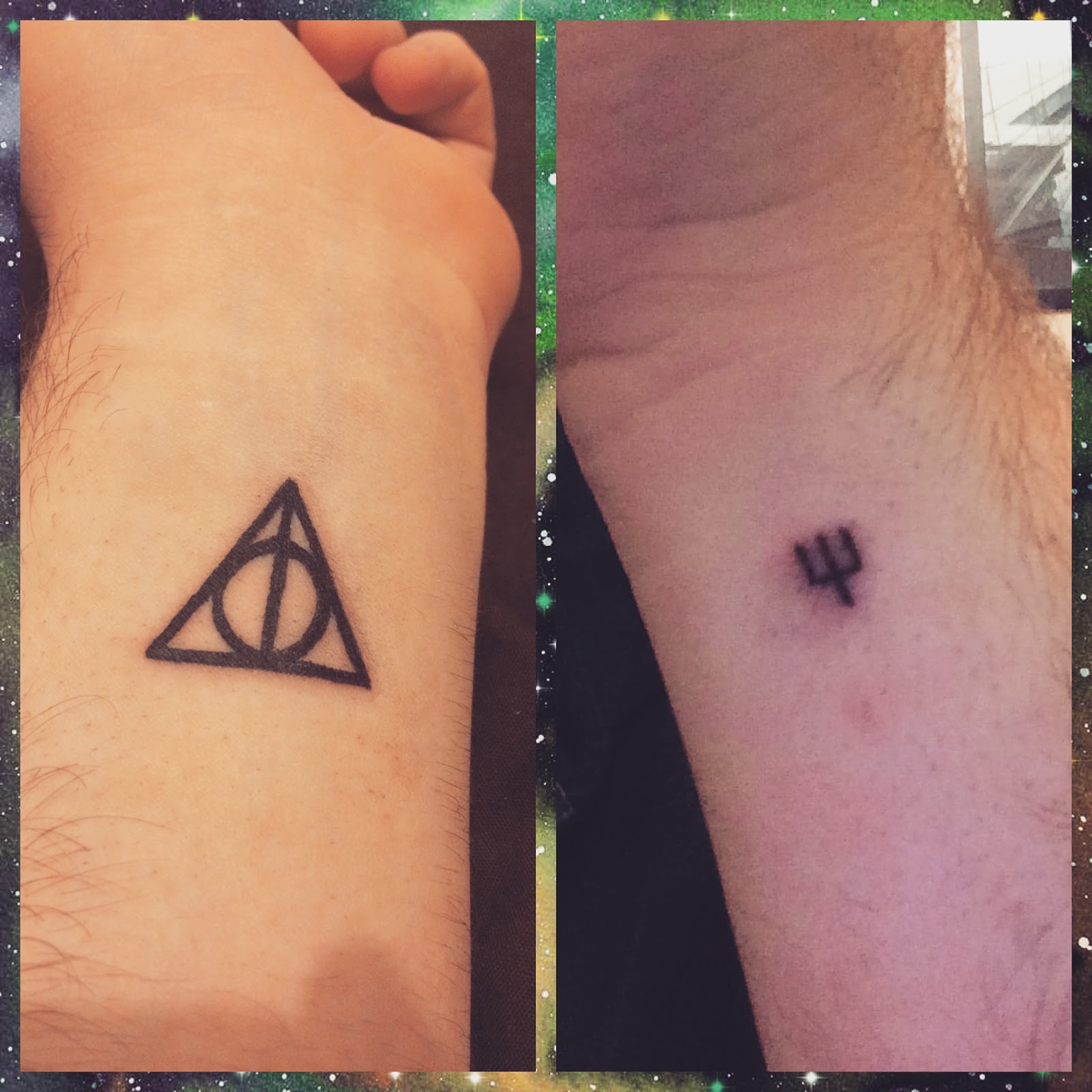 So, some explanations... The first one I had done, the one on the left is obviously the most recognisable. It's iconic and unique to the wonderful Harry Potter series by the incomparable J.K. Rowling. And it is of course the mark of the Deathly Hallows! I was obsessed with the books as a kid, reading the first 3 back to back when Harry Potter and the Prisoner of Azkaban came out because my Nan saw the books and thought me and my sisters would like them... She was right of course, and my obsession has never really died down. Through the rest of the series, to the films, to now, I am still as obsessed as ever and as soon as I finished Harry Potter and the Deathly Hallows, I knew I wanted one day to have some way of remembering my obsession and the mark of the Hallows seemed like a great place to start!

Not only is it symbolic of my love for this series, but also for something it kickstarted in me. I remember being 11 years old, on holiday at Haven Caravan Park in Hastings (somewhere in the south of England) and getting Harry Potter and the Order of the Pheonix. I had been waiting so long! I couldn't get it the day it came out because it was a family friends wedding. Gosh I remember that day so well! We even walked past a WH Smith with a massive banner outside saying that the book was on sale that day. I was so mad. My mum said I couldn't have it, so I went to my Nan who was also there, the same one who introduced me to the series, and she said no too. Man, I was GUTTED! But I waited, and after 2 weeks, I finally got a copy when we were on holiday and I spent the rest of the time in the caravan reading and falling in love again. I remember thinking how people were getting so excited about this book, how everyone was clamouring for it and dying to know what happened next, and I wanted to give people that same feeling! It was around this time that I decided I wanted to be a writer and ever since I have been crafting and honing my writing. I dream of being published one day, but until such a day comes, I still know that it is J.K. Rowling and her world, her characters, her words and her incredible imagination that inspired me to start writing in the first place, and for that passion I have found I will never be able to thank her enough!

It also symbolises some things personally for me. Around the time the series was coming out, we lost all four of our surviving grandparents (we had been raised with 6 technically, as my mums mother and father both remarried) from 2004-2008 in very quick succession and this took a massive toll on us. Around this time, my reading and writing really helped me through some tough times and was a real form of escapism that I just could not get enough of. The symbol in the book obviously related to death and how if you have all three Hallows you will become the Master of Death, and this spoke to me. Kind of a reminder that we can't fight death and just to enjoy my life as much as I can while I am here!

The mark comes from the Tale of the Three Brothers, taken from The Tales of Beedle the Bard. I ADORE my collectors edition copy, which I only got last year. It is stunning and I love this picture I took of my tattoo and the book! I'm so happy I have had it done at last! 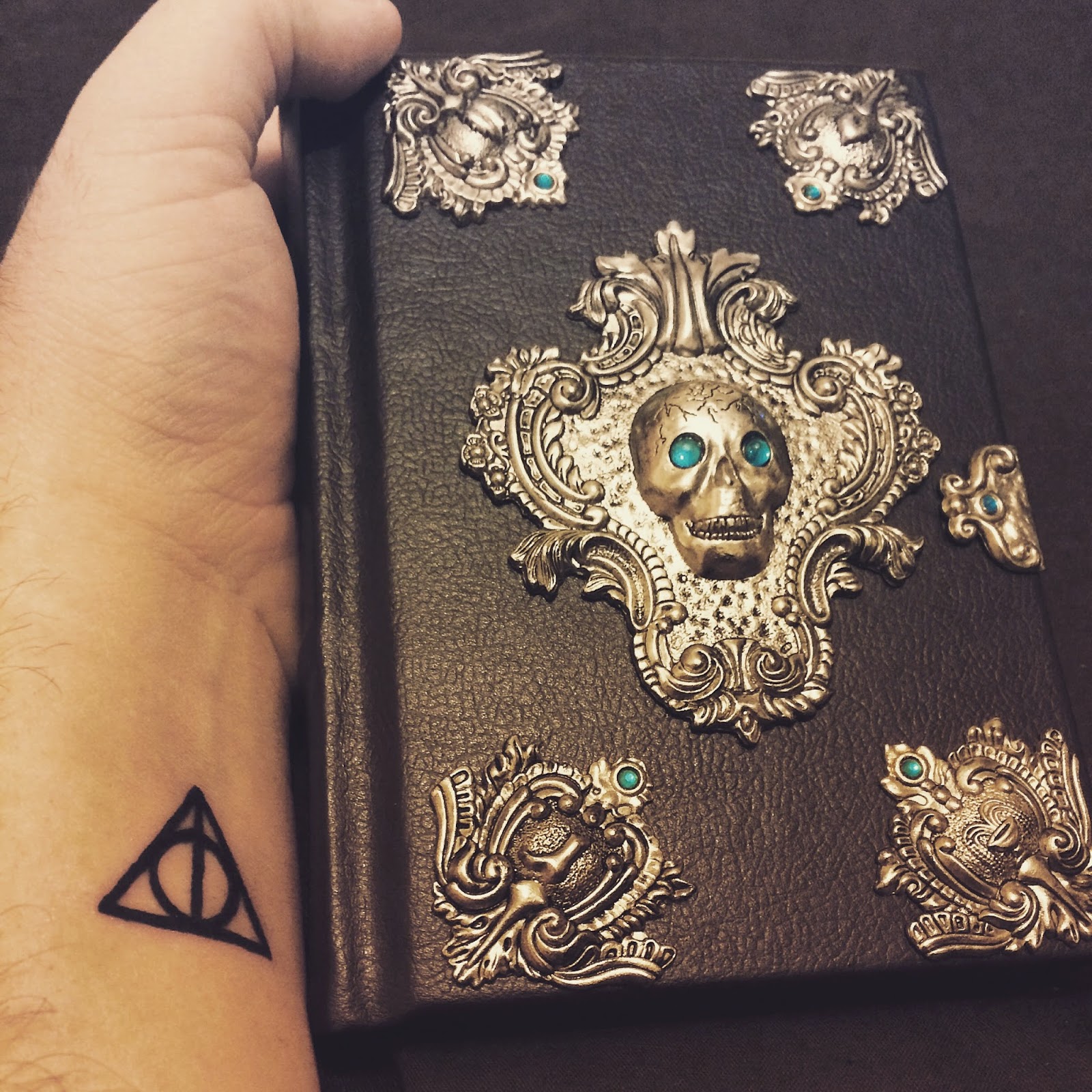 And on to the second tattoo, then! This one is a wee-little dinky one, and it literally took 30 seconds but it's one I love and have wanted even longer than I have wanted the Deathly Hallows mark.

People that know me will know that I am freaking obsessed with Michelle Paver. I think she is an incredibly talented individual with a stunning mind and her books feel so real and yet so magical, so fantastical, that I only have to turn the page and I am drawn into the world of the Forest with its hunter gatherer society, or the world of Ancient Greece with their bronze daggers and erupting volcanoes. This tattoo comes from her first series, Chronicles of Acient Darkness which started with Wolf Brother, and continued on through Spirit Walker, Soul Eater, Outcast, Oath Breaker and finally, Ghost Hunter. This series literally blew my mind. I would get the newest addition, read it in several hours and already begin lamenting the fact that I had a whole year to wait for the next one. My love knew no ends. I have met Michelle several times, and used to write to her all the time (which reminds me, I should really write to her again as it has been a while!) and she is so kind, so sweet and so brilliant to be around. She gives off this energy that is so intoxicating and makes you want to go on adventure like her characters. It's amazing. Again, she has been a MASSIVE inspiration for my writing, and has given me a lot of advice and encouragement which I cannot thank her for enough. I attended a writing course she did back when Outcast came out in 2007 and it was so much fun and she was such a great teacher in that respect.

This particular series follows Torak and his friends as they try to rid the Forest of the dreaded Soul-Eaters. A group of rogue Mage's who are hell bent on destroying everything and unleashing demons upon the world. It takes you from the open forest, to the sea, to the far north, to the east, deep into the darkest depths of the Forest and into the high mountains and never stops for a second. It also has a lot of great, heart-felt moments too. And one such moment is when Fin-Kedinn, leader of the Raven Clan and Torak's kind of father figure after his birth father dies in the first pages of Wolf Brother, is talking to Torak about good, and evil, and the choices you can make. He says:

“Evil exists in us all, Torak. Some fight it. Some feed it. That's how it's always been.”

And it is so true! We all have good and bad sides, and it is up to us how we choose to utilise them. Whether we act upon our good intentions or our bad ones, what sort of person we really are. The symbol I have had tattooed is the mark of the Soul-Eaters. In the books, they have it on their chest, directly over their heart, but I didn't want it there. I wanted it as a reminder of the above quote, that I can be good and I can be bad, it's up to me who I am and who I want to be, as well as the fact I just think it is cool and for Michelle's inspiration. The design itself is probably different from the one they actually had in the book, it isn't actually specified as far as I can remember. However in the books, they use little symbols in the place of asterisks to mark breaks in the story whilst still in the same chapter. At times in the series there are reeds, mountains, waves, a small oak tree, and this symbol, which I took directly from the text for my tattoo!

We first encounter the Soul-Eaters properly in the third book, Soul Eater, so I took a picture with the book just because! Who needs a reason? Ha! 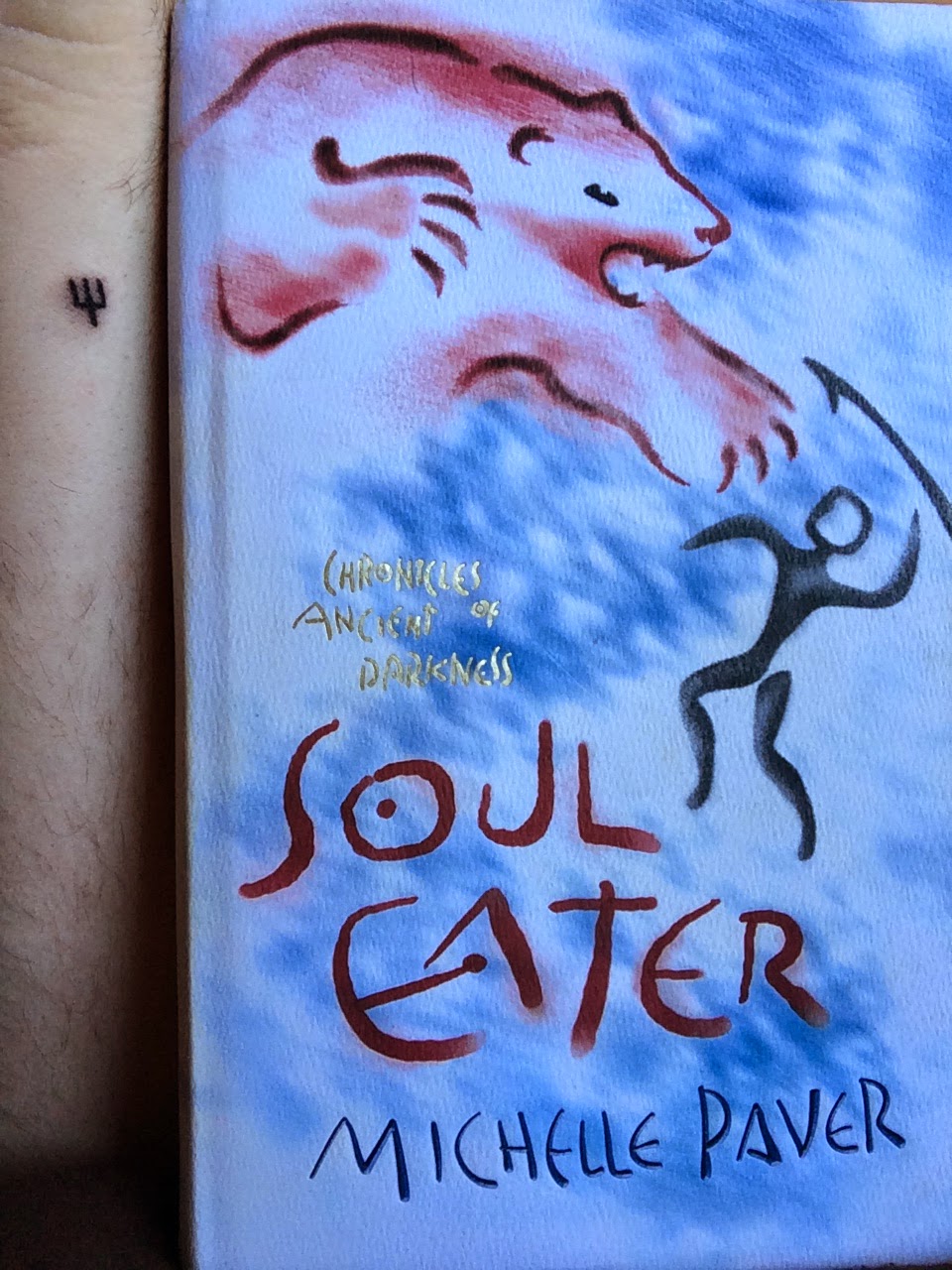 Yes it is small, it's the exact size as it appears in the book, but I am not a fan of massive tattoos and wanted little ones to start off with so if I do decide I want a bigger one at some point in the future I know I can handle it and what to expect pain-wise, because it was literally painless. I didn't feel much of the Hallows tattoo, but when he did the Soul-Eater tattoo, it felt a bit like the needle was pretty deep in my skin and tickled a fair bit but like I said, that was 30 seconds of my life and now I have 2 tattoos I love and am proud of. They have true meaning for me, my life and I have thought about them for a very, very long time so cannot see myself ever regretting getting them!

So there you go. My bookish tattoos. Maybe I'll get more, may I won't. Who knows?