Simon vs. the Homo Sapiens Agenda by Becky Albertalli [Review] 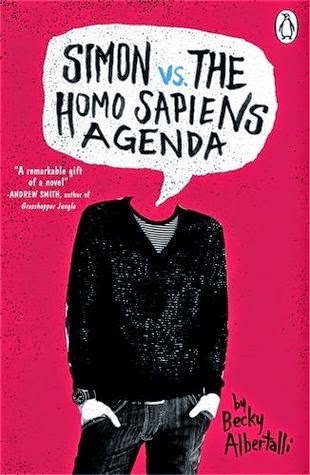 Official synopsis: "Sixteen-year-old and not-so-openly gay Simon Spier prefers to save his drama for the school musical. But when an email falls into the wrong hands, his secret is at risk of being thrust into the spotlight. And worse still, so will the privacy of ‘Blue’, the pen name of the boy he’s been emailing.  With messy dynamics emerging in in Simon’s once tight-knit group of friends, and his email correspondence with Blue growing more flirtatious every day, Simon’s life suddenly becomes just a little complicated. Now Simon has to find a way to step out of his comfort zone before he’s pushed out – without alienating his friends, compromising himself, or a fumbling shot at happiness with the most confusing, adorable guy he’s ever met."

This book guys. This book! Gah. Just... Man, I do not know where to start.

I'm going to say it right off the bat, I fell in love with this book so quickly and so unquestionably that whilst I wanted to finish it to see how things would wrap up, I never ever EVER wanted it to end. I wanted it to envelop me as deep into the world of Simon and his friends as I could go. Seriously guys, this is my FAVOURITE book of the year so far, hands down! I first heard about it from George (aka George Lester, and George Lester Writes - this man has AMAZING taste) on Twitter and Instagram. Having already had an e-arc for a few weeks this only made me excited - the things I was hearing and his obvious love for the book made me want to read it even more.

The book itself is written so well and Becky has totally managed to capture the goings on in a teenage boys head, let alone a teenage boy like Simon. Simon is gay - he's not out but he's talking to a boy... Well... he's kind of talking to a boy. Emailing a boy, actually. Only Simon has no idea who Blue really is. He know's he is someone who goes to the same school at him, and that Blue obviously isn't his real name, and that Blue, just like Simon, is also gay and not out either. I loved the emails between the two characters. I liked that they took up whole chapters on their own and while this sort of thing can detract from the book itself, taking you out of the main action of the story and distracting you slightly, here it works so well and actually adds to the book. Their emails are so cute, so thoughtful and so real and relatable.

The characters all feel real and relatable to, so much so that a few of the characters reminded me of some of my own friends when I was in school, sharing some traits that a few of my friends had and this made me like the book even more, made me get into it even more, because I related to Simon and his situation so well. Whilst I didn't go back and forth emailing some mystery boy, I did struggle with my own coming out and what I love about this book is that it isn't an average coming out book. It's more than that. The whole way the book flows, the way the events take place, it made me feel all warm in side and I felt so happy for Simon. I know the feeling of everything being okay afterwards, but it's the niggling thoughts you get before that really destroy you and my dad and Simon's dad are SOOOOO similar it is unreal. Seriously! My dad makes everything into a joke, just like Simon's, and he used to make a lot of gay jokes too, but like Simon's dad it died down a long time ago, and was just his way of dealing with things - so that was another thing I liked about the book. The fact that it was so relatable, for myself at least, was incredible and I know there will be countless others out there who identify with Simon and with aspects of the book itself. 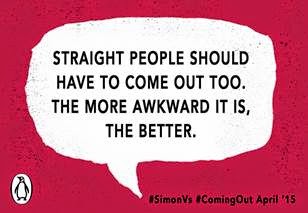 And Blue! Oh man I did not see that coming. All the way through the book I was trying to work it out, it's almost like a gay whodunit, or more rather, I guess, a whoisit? I would decide with one chapter that it would be one person, and then the next I would guess that it was someone else, but never once did I actually get it right! Damn! Becky your red herrings were very well placed! The reveal and the aftermath though had me smiling from ear to ear right through the last pages of the book!

And oreos... That's all I am going to say! Man I love oreos and this book does not help what is already an obsession! Again, thanks Becky!

Overall, Simon vs. the Homo Sapiens Agenda is a stunning, beautifully written tale of secret love, coming out and growing up that will make you fall in love with the character and beam from ear to ear when you turn the last page, more than satisfied!

I love this book so much and would gladly read it again, and again, and again, and again. Because it is such an important book! We need more books like this! We need more books that normalise being gay - when I was in my teens there was nothing around like this at all. Nothing. And that makes me sad. If books like Simon vs had been around when I was a teenager I dare say my outlook at the time would of been completely different to the one I had in reality. I cannot thank Becky enough for such a wonderful book and for George's ranting on Twitter and Instagram that this book was amazing and needed to be read by everyone. He wasn't wrong, and I cannot wait to see an even bigger outpouring of love for this book as time goes on!

My thanks to Penguin for my e-review copy via Netgalley!