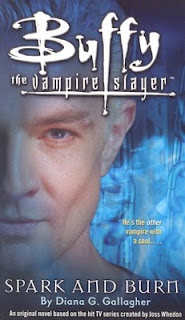 Written by: Diana G. Gallagher.
Published by: Pocket Books.
Format: Paperback.
Released: 1st August 2005.
Rating: 4/5.
Official synopsis: "In SPARK AND BURN, fan-favourite Spike - the other vampire with a soul - takes centre stage. For centuries he was a bloodthirsty scourge of humankind, killing without bias, feeding on whomever (or whatever) came his way. That would all change when Riley Finn and the covert organisation known as the Initiative planted a microchip in his brain which rendered him incapable of harming a human being. As Spike learned to cope with this handicap - the worst a vampire could imagine - he found himself falling in love with the woman who had been his nemesis - Buffy Summers, the Slayer. Their relationship is a stormy one, with years of mistrust between them. But after Spike regains his soul, undergoing terrible trials in the process, he and Buffy come to a kind of peace with one another; and Spike, finally, begins to find peace with himself."
I was given this as a gift by my Nan (RIP) a few years ago. Probably 3 or 4 now. But I'd never read it until now, which I'll admit is shameful. Even more shameful now that I have read it and now know what I missing!
Spark And Burn is a brilliant book. Yes, it re-hashes many scenes from the series, but it is brilliantly written. And a true Buffy fan would love it, just like I did! There are some new scenes in there that I think are excellent. Diana G. Gallagher has a good understanding of the characters. The book is told entirely from Spike's point of view! It mostly takes place in the episode 'Lessons', the openning episode for the fantastic seventh season of the show. He's going mad in the basement, and is having flashback after flashback, reliving scenes throughout the entire back-catalogue of the show. It's interesting to really get a good idea of what Spike thought of the other main characters towards the start of the series, and seeing these thoughts change.
An excellent book! If you can get your hands on this book, do! I have a few more Buffy books that I am going to have to dig out and read thanks to this one!
Buy from AmazonUK
Posted by Ryan at 15:57