Cover VS Cover - Empire of Night 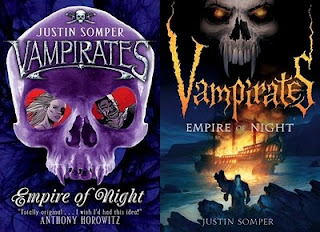 UK//US
Now, being a big fan of Justin and his Vampirates series, (and of course running the fansite, TheNocturn), I take a big interest in the international covers for the books aswell as my native UK covers.
When S&S changed the covers of the series, launching Black Heart as the first with the new style, I have to say I was mighty annoyed. Why fix something if it isn't broke? But I have since fallen in love with them, and the design of Empire of Night is just perfect. The comic book/manga style reverse on the front cover is brilliant.
On the other side of the pond in the US, I've never really been a fan of the UK covers as they've generally been a little bit of a re-hash of the UK covers, just in a different style. But now Little Brown are also re-launching the series with a stunning new look. A look for the series that makes me want to emigrate I love it that much!
The cover for Empire of Night, as you can see about is completely and utterly stunning. My favourite book cover of the year so far, I hasten to add. I am seriously going to have to import a copy of this. It's perfect. The colours. The skull. It really fits the horror side of the story.
Bravo Little Brown. So for this one, the US cover gets my vote. A very rare occurrence as normally I prefer the UK art for most books!
Posted by Ryan at 15:37