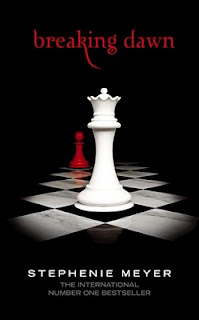 Written by: Stephenie Meyer.
Published by: Atom (UK), Little Brown Books (US).
Format: Hardback.
Released: 2nd August 2008 (US), 4th August 2008 (UK).
Rating: 4/5.
Official synopsis: "To be irrevocably in love with a vampire is both fantasy and nightmare woven into a dangerously heightened reality for Bella Swan. Pulled in one direction by her intense passion for Edward Cullen, and in another by her profound connection to werewolf Jacob Black, she has endured a tumultuous year of temptation, loss and strife to reach the ultimate turning point. Her imminent choice to either join the dark but seductive world of immortals or pursue a fully human life has become the thread from which the fate of two tribes hangs. Now that Bella has made her decision, a startling chain of unprecedented events is about to unfold with potentially devastating and unfathomable consequences. Just when the frayed strands of Bella's life - first discovered in Twilight, then scattered and torn in New Moon and Eclipse - seem ready to heal and knit together, could they be destroyed...forever?"
I can't pretend that I am not infinitely disappointed with Breaking Dawn. In actual fact, I'm pretty annoyed. Yes, we all want happy endings, but something that annoys me about Bella is that she always gets what she wants, and she goes about it in the most obnoxious manner.
I fell in love with Twilight, and really did not like New Moon, but Eclipse restored my faith in Meyer. I adored it. And for the most part, I adore Breaking Dawn. I can't fault Meyer's writing. It's still as addictive as the previous books in the series. But I felt that at the end of the 700 page epic, that things all just seemed to simple. I know there was a fair share of opposition in the book, from Edward as regards Renesmee until he could hear her think, and so on. But it all just seemed too easy.
Bella just gets what she wants. It's kind of boring to be brutally honest. For is being the final book, I would also of liked it to be a bit more action-packed.
I LOVED Jacob's part, after initially saying it was boring. I quickly changed my mind, and was disappointed when the narrative reverted back to Bella. It just seemed to flow more naturally coming from Jacob.
All in all, Meyer has done a good job. It get's a 4 out of 5 from me, because it is a good book. It would of been a 5 had there been a bit more drama, a bit more soul.
Maybe one day if I return to the series to read them again, I'll change my mind, but these are my initial views. Satisfied, but a little disappointed.
Buy from AmazonUK
Buy from AmazonUS
Posted by Ryan at 14:13