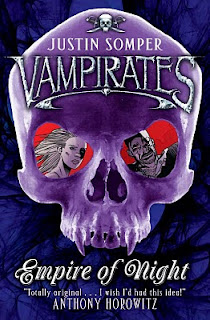 Written by: Justin Somper
Publisher: Simon & Schuster UK
Format: Paperback.
Released: 4th March 2010.
Rating: 5/5.
Official synopsis: "Sidorio, fuelled by grief and revenge, is intent on becoming King of the Vampirates and building a new empire to bring terror to the oceans. He faces growing opposition from both the Pirate Federation, including Vampirate Assassin Cheng Li, and the Nocturnals - the more benign vampirate realm - led by Mosh Zu and Lorcan Furey. Both the pirates and the Nocturnals are forced to raise their game in response to the new and urgent threat from Sidorio and the renegade Vampirates. Twins Grace and Connor Tempest, still ricocheting from the recent discovery of their true parenthood and its explosive implications, are thrust deep into the heart of the conflict. Old foes and allies are thrown together in unexpected ways and, as the stakes rise higher than ever before, Grace and Connor find their alliances shifting in ways no-one could ever have possibly foreseen..."
Wow wow wow wow wow wow WOW!
Empire of Night is the fifth book in Justin Somper's terrific Vampirates Series. Blending piracy with vampirism is not an easy task, but Mr. Somper does a terrific, neigh... AMAZING job, as this book only proves.
This book has a slightly different style to the previous four. The openning chapter, well, prologue, actually takes place in the closing chapters of the book. Rather frustratingly, this prologue is absolutely amazing. So descriptive, so addictive. I was hooked instantly, and then to have to return to the start of the story, and have to wait to see what happens next was a major task! I had to fight tooth and nail not just to flip right to the end and see what happens next! Believe me though, it is totally worth waiting for! Do not, under any circumstances flip to the end, like I was tempted!
After the revelation at the end of the last book, Black Heart, there are some interesting developments involving the twins, Grace and Connor, and their growing appetite for blood. This for me was a massive highlight of the book.
I really don't know what else to say, what else I can say,without spoiling the book. All I can say, is that it is by far my favourite of the series. With some stunning twists and turns, major deaths that shocked me to the core, really! It's not very often a book makes me cry, but I did shed a few tears at the death near the end!
Well done Mr. Somper. One extremely happy Nocturnal here! Excited to see what you have up your sleeve for Book Six! I cannot recommend this book enough. The series too! If you haven't read them yet, what are you waiting for?
Buy from AmazonUK
Posted by Ryan at 15:46