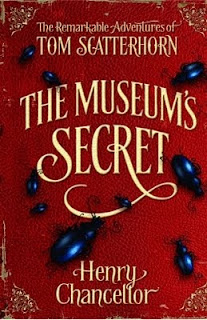 Written by: Henry Chancellor.
Published by: Oxford UP.
Format: Paperback.
Release Date: 7th May 2009.
Rating: 4/5.
Official synopsis: "Welcome to the Scatterhorn Museum! But don't get too excited - it's a cold and dingy place, crammed full of tatty stuffed animals and junk. Nobody much wants to visit any more, and its days are surely numbered. But when Tom is sent to live here he soon finds there is more to this museum than meets the eye. The animals may be shabby and moth-eaten - but they possess an incredible secret. And when Tom discovers he can go right back to the time of their making, a hundred years earlier, he embarks on a journey full of unimaginable terrors . . . Join Tom in his breathtaking adventure in and out of time, from an Edwardian ice fair and the wastes of Mongolia, to the jungles of India, and beyond . . ."

The Museum’s Secret is the first book in a trilogy. The Remarkable Adventures of Tom Scatterhorn. And boy are they remarkable! The first chapter is an explosive beginning, weaving together a beetle-hunting expedition to Mongolia, and a terrifying river of predatory beetles!

We then get to meet Tom. An 11-year-old boy who’s been sent to spend the holidays with his rather eccentric Aunt and Uncle. The Scatterhorn family have owned the mysterious Scatterhorn Museum for generations. Once a grand affair, it is now in disrepair. The taxidermy animals once in real-life poses now lie shabby and moth-eaten. But there is a secret in the Scatterhorn Museum. One that for me, makes this book amazing to begin with.

The animals come to life at night! Now, not many kids will tell you that they haven’t fantasised about this! The animals, the fossils, the Egyptian mummies in a museum coming to life when all of the visitors have gone home. The same principle of Toy Story. Imagining that at night, or when you aren’t around, your toys come to life. With this alone, Henry Chancellor had the child within me captured and I could not have lived with myself if I didn’t read on!

But that isn’t all. There is a magical secret, even better than the animals coming to life. A secret that allows you to go back in time. 100 years. Sounds good, huh? It is. But only when there aren’t villains around to spoil the fun!

And the villains in this are fantasic! Don Gervase Askary and his un-settling daughter, Lotus. They are pure evil. Their dialogue is laced with menace and every time they appear, you get a little shiver that erupts down your spine. Well I did anyway!

I really don’t know what else I can say. I don’t want to spoil it for anyone.

A fun, captivating read with rich characters and some beautiful descriptive writing (although this is probably also the only negative comment I have about the book, sometimes the description is a bit long, and kind of takes away from the moment, but the rest of the book more than makes up for this).

It's definitely left me wanting for more! Can't wait to read the sequel!