My Swordhand Is Singing [Review] 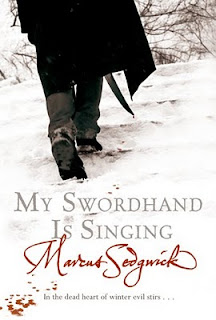 Written by: Marcus Sedgwick.
Published by: Orion.
Format: Hardback.
Released: 3rd May 2007.
Rating: 4.5/5.
Official synopsis: "In the bitter cold of an unrelenting winter Tomas and his son, Peter, arrive in Chust and despite the inhospitability of the villagers settle there as woodcutters. Tomas digs a channel of fast-flowing waters around their hut so they have their own little island kingdom. Peter doesn't understand why his father has done this, nor why his father carries a long battered box everywhere they go, and why he is forbidden to know its contents.

But when a band of gypsies comes to the village Peter's drab existence is turned upside down. He is infatuated by the beautiful gypsy princess, Sofia, intoxicated by their love of life and drawn into their deadly quest. For these travellers are Vampire Slayers and Chust is a dying community - where the dead come back to wreak revenge on the living. Amidst the terrifying events that follow, Peter is stunned to see his father change from a disillusioned man to the warrior hero he once was.
Marcus draws on his extensive research of the vampire legend and sets his story in the forbidding and remote landscapes of the 17th century. Written in his usual distinctive voice, this is also the story of a father and his son, of loss, redemption and resolution.

An original interpretation of the timelessley fascinating vampire myth, and a story of father and son."

First off, I can’t believe I haven’t read this, and after the epicness of it all, I feel even worse! My Swordhand Is Singing is a true vampire novel. None of your Twilight-ish vamp falls in love with a human theme here. Oh no. This is the stuff of true vampire legend! Taking you right back to 17th century Eastern Europe where the legends of the vampire were first born and bred.

This is a truly good book. It’s addictive, a quality that all good books need. It’s gripping. Full of suspense. And twists and turns. It follows Peter. The son of a woodcutter who just also happens to be a drunk. They now live in a village called Chust, after living a nomadic lifestyle, never being welcome wherever they choose to stay. And then things in Chust take a dark and sinister turn. Things begin to happen that can’t be explained. Deaths. The slaughter of animals. Bodies drained of blood. But Tomas seems to know something about it, and hides a deep secret.

I have to say that I love the way the vampires feed in My Swordhand Is Singing. I’m not going to spell it out, as you need to read this book, and you’ll find out doing so. But it’s very different to the ways in todays literature. And they are called hostages, rather than vampires. To illiterate the idea that they really are the living dead, a hostage in their own body, rising from the grave to feed. Something I love about this book, is that it really has stayed true to these Eastern European legends. The hostages are devoid of any humanity. They are cruel and hell bent on only one thing. Blood. No love. No compassion. The true monsters they were before todays generation gave them the ability to love. These hostages are far more effective. How can you really be scared of a vampire that can love you just as much as they love drinking your blood?

There is a little bit of romance in this book, but it isn’t in a Twilight way as I previously mentioned. No hostage/human loving. And it isn’t even an important theme. More of a sub-plot.

The setting is perfect. It fits the dark tones of the book perfectly. The forest bordering the village is described in beautiful detail and used brilliantly to create suspense. Let’s face it, no one likes to be out in the middle of the forest in the middle of the night at any time, let alone when hostages are roaming...

Marcus Sedgwick’s writing is perfect. Fluid. Captivating. I am really glad I read this book. Really glad. I cannot recommend it enough.