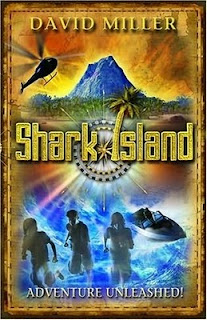 Witten by: David Miller.
Published by: Oxford University Press.
Format: Paperback.
Released: 7th May 2009.
Rating: 4/5.
Official synopsis: "Hanna, Ned and their parents are on the holiday of a lifetime on the paradise island of Kaitan. But the idyll is shattered when pirates come in the night, burning their house and kidnapping their mother and father. The children are stranded, and don't even know if their parents are alive or dead . . . In this action-packed adventure, there is no one to help. Survival and escape are up to Hanna and Ned."
Shark Island is a remarkable, roller-coaster of a book. It is gripping. Once you get into it, you literally cannot put it down! Shark Island, so called because it looks like a sharks fin rearing out of the water, is a dangerous place, as Hanna and Ned soon find out when their parents are taken by Pirates. It's up to them to save their parents.
Don't be fooled by the artwork. It looks like it's for a slightly younger audience, but this book will be loved by older and younger readers alike! And the description! The location is brought to life brilliantly by Mr. Miller, who has spent many years living in Malaysia and Singapore, and this shows.
This book has everything you could want from a book. Suspense. Danger. Courage. Fear. Old conflicts. Bad guys. Good guys. It's just fantastic. Fast paced too. It suits every reader.
I have thoroughly enjoyed this book and I look forward to reading the follow ups. Sea Wolf (released in January this year), and the third book, Leopard's Claw (released in July!)
Buy from Amazon UK
Posted by Ryan at 13:29