Lex Trent Versus The Gods [Review] 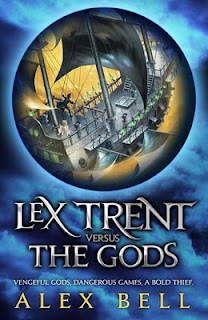 Written by: Alex Bell.
Published by: Headline.
Format: Paperback.
Released: 4th February 2010.
Rating: 4/5.
Official synopsis: "Law student Lex Trent’s world is inhabited by fearsome magicians, ageing crones and a menagerie of Gods and Goddesses. And while Lex is seemingly dedicated to his legal studies he’s always enjoyed a challenge – which is why he leads a double life as the notorious cat burglar ‘The Shadowman’ who has been (luckily) evading capture for years.
But Lex’s luck is about to run out because the Goddess of Fortune has selected him to be her player in the highly dangerous Games. Losing is not an option for Lex (particularly as it so often involves dying) but can he really win each of the perilous rounds? Given that the reward for doing so is money, fame and glory – all things that Lex is quite keen on – he’s going to do whatever it takes to make sure he will... and he’s certainly got good experience of cheating."
I am a big fantasy fan. But I have to admit, when I saw the words Law student, I thought "Oh dear". But Alex Bell has accomplished something that I didn't think was possible. She made it fun!
Lex Trent Versus The Gods truly is a remarkable debut YA novel. The first in a series, it's action-packed, witty, fast paced and thoroughly enjoyable. Beautifully and richly written.
Lex is hand chosen by the Goddess of Fortune to play in the Games. Set up by the deities of the Lands Below for enjoyment. If he wins, he's set for money, fame and a whopping fortune. But if he loses, he can't just simply walk away. He has to die! So there is a lot at stake. But he accepts and it makes for an amazing read. Tension filled. Intriguing. And the world Bell has created is utterly fantastic. I am excited to see how Lex will explore and exploit this world further as the series progresses. The Globe has split into two perfect halfs, and is connected by an axle of ladders. How amazing does that sound? Very, is your answer!
I really don't know what else to say, because I don't want to spoil this for anyone. It really is remarkable, and I cannot recommend it enough, and I cannot thank Headline enough for being kind enough to send me a copy!
One very happy reader right here.
Buy From Amazon UK
Posted by Ryan at 09:56