Curtis Jobling has only just released the second book in his Wereworld series, Rage of the Lion and already we have news about the third book in the series. It's called Shadow of the Hawk and is out in January (2012 that is...) and the cover is a beauty! I think it's my favourite of the series yet! Haven't read book two yet but this news has gotten me so excited that I better get cracking! 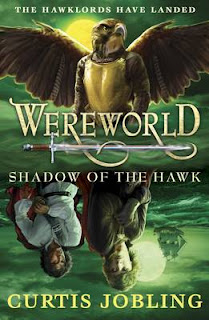 Published: January 2012.
Published by: Puffin.
Official synopsis: "Young Werewolf Drew Ferran is the future king of Westland. Drew is taken on board the Banshee to the volcanic island of Scoria where he is sold to Lord Ignus the Werelizard to perform in the Furnace, a gladiatorial arena in the bowl of the slumbering volcano. When he escapes with the help of some new allies, they discover the Doglords have an army preparing to attack. Drew has to ask himself - is it time to fight ...or to flee? Book three in the Wereworld fantasy-adventure series from Curtis Jobling, the award-winning designer of "Bob the Builder"."
Pre-order on Amazon UK
Posted by Ryan at 09:00